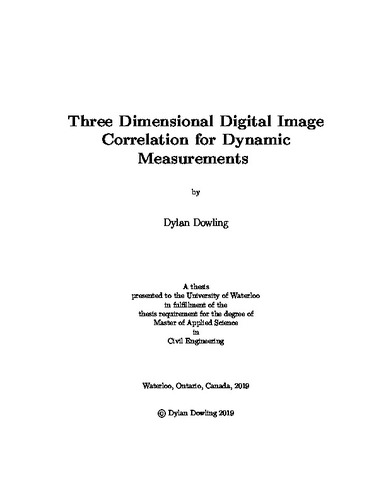 Structural inspections have traditionally been completed by inspectors using simple tools to determine the health of a structure. The limitations using these techniques led to the development of quantitative sensors such as strain gauges, displacement transducers, and accelerometers. These sensors are still limited by requiring physical access to the structure and extensive cabling and setup. Optical techniques, such as laser Doppler vibrometry and photogrammetry, have been developed to allow technicians to inspect the structure with little or no physical access to the structure and minimal cabling. Digital Image Correlation (DIC) is a photogrammetry technique that involves tracking multiple subsets through a series of images to determine full field displacements. DIC can take the form of 2D DIC using one camera or 3D DIC using more than one camera. DIC use has typically focused on strain analysis, although researchers have recently begun to use DIC for full field dynamic analysis. Commercial packages have focused on strain analysis, with few software packages having any modal analysis capabilities built in. Commercial packages are also quite expensive. The goal of this work is to provide an open-source 3D DIC software package with built in modal analysis functionality. The software package will allow for use of various interpolation functions, shape functions, and de-noising options working within an Inverse Compositional Gauss-Newton (IC-GN) registration algorithm. A numeric study was undertaken to determine optimal 2D and 3D DIC analysis parameters using the IC-GN algorithm. The numeric study made use of simulated images to provide improved control over image quality and to eliminate or control error sources. Images were simulated using 8px diameter speckles and a subpixel displacement from 0 to 1px. Left and right images were generated with a known horizontal displacement to simulate a classical stereo vision setup. For 2D analysis, a bicubic interpolation function with a 5x5 Gaussian blur is recommended. If the displacement field is known, then a matching shape function should be used. Otherwise, a 2nd order shape function should be used to ensure the displacements are captured. A subset size between 41x41px and 61x61px is recommended for 2D analysis. For 3D analysis, a bicubic interpolation function with no Gaussian blur is recommended. A higher order interpolation function was found to not improve error levels, and the Gaussian blur increased the random errors without improving the bias errors. A 2nd order shape function is recommended when matching between left/right images to capture deformation with imperfectly aligned cameras. A matching shape function is recommended for analyzing the sequential images if the displacement field is known, otherwise a 2nd order shape function should be used for analyzing sequential images as well. A 41x41px to 61x61px subset size is also recommended for 3D DIC analysis. An experimental validation test was conducted on a thin, vibrating steel plate. This test demonstrated the capabilities of the 3D DIC system in conducting real world modal analyses and served to verify the system measurements against a reference laser vibrometer. Two high speed, high resolution cameras captured one side of the plate, while a laser vibrometer captured the other side. Excitation was provided by an impact hammer. The displacement signals were generally found to be 97 to 98\% cross correlated. The mean error in the magnitude of the displacement signal peaks was approximately 1.5 to 1.7\% for most test runs. The DIC system demonstrated very high accuracy in measuring displacements using the laser vibrometer as a baseline. The modal analysis revealed very similar fundamental frequencies measured by the DIC system and laser vibrometer, with the largest difference being only 0.08Hz. The DIC system was also able to extract the mode shapes of the plate, which matched favourably with the results from finite element modal analysis. Overall, 3D DIC is a very valuable tool in modal analysis due to its quick setup, good accuracy, and additional information in the form of mode shapes and damping ratios.