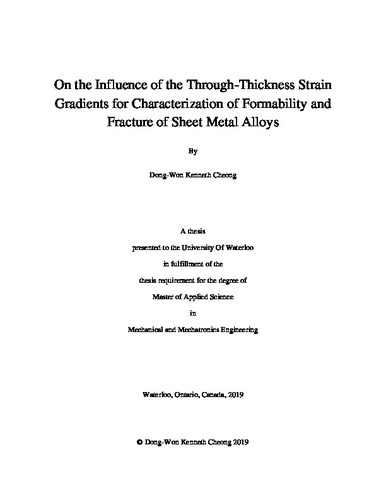 The main focus of this thesis is to investigate the effect of through-thickness strain gradient on sheet metal formability. Current technology for formability analysis has relied upon deformation modes of in-plane stretching in which localized necking and unstable strain localization become the dominant failure mode. The formability of sheet metal is often explained with a forming limit diagram (FLD) that the onset of necking indicates the upper end of the formable range. However, it is practically known in the industry that a material can often be formed beyond the conventional forming limits under out-of-plane deformation. The through-thickness strain gradient generated by out-of-plane deformation suppresses the onset of necking and thus improves formability. In this thesis, novel out-of-plane formability tests were designed and performed to investigate the correlation between the severity of bend and material formability. Three deformation modes considered in the research: a pure bending under plane strain, equi-biaxial stretching with severe bending, and a combination of stretching and bending. These formability tests have been specially designed to employ Digital Image Correlation (DIC) to obtain full-field strain measurements until fracture. The advent of DIC has revolutionized the field of experimental mechanics and allows for a better understanding and quantification of fracture strains compared to indirectly inferring them from inverse finite-element simulations based upon a measured displacement to the failure of the test sample. Various automotive sheet metal alloys are considered in this thesis. However, the focus materials of interest were advanced high strength steels such as DP980, and an aluminum alloy, AA5182, since they have distinct mechanical properties in aspects of strength, ductility, and hardening behavior. In the field of formability, the VDA238-100 bend test introduced in 2010 has rapidly gained acceptance since it has reliable and intuitive test parameters for bendability analysis. In contrast to the most of traditional formability tests in which in-plane stretching is the dominant failure mode, the VDA bend is designed to investigate material response under the pure bending condition in which the most severe through-thickness strain gradient is expected. The result is reported in terms of bend angle which is a direct and straightforward representative of bendability. However, the relatively simple setup of VDA bend test provides a fundamental limitation as the test data is restricted to the load and punch displacement only. Therefore, a novel bend test apparatus based on VDA 238-100 specification was developed at UW as a part of this thesis to introduce best practices of bendability analysis with the addition of DIC. A wide range of metals such as AHSS, aluminum alloys, and magnesium were considered in this research to investigate plane strain bending behavior. The results indicated that the presence of through-thickness strain gradient effectively suppresses necking, thus a remarkable improvement in formability was observed. The concept of imposing through-thickness strain gradients was also applied to the equi-biaxial stretching condition. Based on Nakazima tests that standardized in ISO12004-2 (2008), scaled-down hemispherical punches were manufactured with the intention of increasing the bend severity by reducing the bend radius. The influence of through-thickness strain gradient on equi-biaxial fracture limit was analyzed with the experimental data and DIC measurement. It was reported that there is a strong positive correlation between the bend severity and material formability. Moreover, it was observed that the mitigation of necking significantly affects the strain development and with the high bend severity, proportional loading conditions were maintained until fracture. It was reported from the Nakazima test and VDA bend test that there is a significant disagreement between the material responses under in-plane stretching and out-of-plane bending. To provide a bridge between these stress-states, a stretch-bend toolset was designed to investigate the combined effect of stretching and bending. A time-dependent methodology was employed to detect the limit strains based on an acceleration of the local strain rate in the necking area. The ratio between stretching and bending was controlled by adjusting the punch radius to investigate the correlation between the limit strain and the bend severity. The positive influence of the through-thickness strain gradient on forming limit was reported. The result was observed to be within the range between the VDA bend test and Nakazima test as this test is intended to investigate the combined effect of bending and stretching. The characterization tests developed in this thesis were developed to obtain linear strain paths until fracture with an emphasis upon plane strain tension which is the critical strain path for sheet metals. The proportional loading condition and linearization of strain paths were observed from the equi-biaxial application which resulted in a remarkable improvement in the fracture limit compared to more traditional tests that involved necking which changes the strain path and is difficult to resolve using DIC for fracture characterization. These fracture limit results provided an insight into the “upper bound” for formability as a positive influence of through-thickness strain gradient was commonly observed. The stretch-bend tests verified that the forming range can be expanded from a traditional FLC to the out-of-plane fracture limit depending on how much bending was involved in the process. During the research, the Nakazima test was performed to provide a conservative forming limit under in-plane stretching. Moreover, the hole expansion test which corresponds to uniaxial loading was employed to complete the draw side of the fracture limit curve. Based on the data collected from in-plane and out-of-plane deformation tests, a new forming limit diagram with the out-of-plane fracture limit curve was introduced to describe material formability in consideration of the effect of bending.

Dong-Won Kenneth Cheong (2019). On the Influence of the Through-Thickness Strain Gradients for Characterization of Formability and Fracture of Sheet Metal Alloys. UWSpace. http://hdl.handle.net/10012/14432