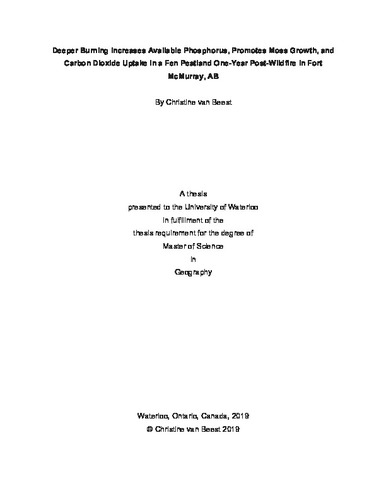 Carbon storage in northern peatlands is estimated to be ~795 Tg, equivalent to ~40% of atmospheric CO2. Peatlands are dominant features of the Western Boreal Plains (WBP), which are experiencing a regime shift to a warmer and drier climate, as well as an increase in forest fire disturbance. Burning of the upper layers of rich organic matter peat releases enormous quantities of C to the atmosphere. The projected response of peatlands to forest fire is concerning, but widely understudied and could be of the utmost importance for the biogeochemical function and future net C balance of peatland. Impacts of climate change driven drying on peatland nutrient dynamics have been explored previously, however, the impacts of wildfire on nutrient dynamics have not been examined. This study assessed the impact of wildfire on N and P bioavailability and nutrient mineralization, plant nutrients balance, and the C and macronutrient stoichiometry and stock in a fen one-year post-wildfire by comparing a Burned and Unburned area. The results show that bioavailable P increased up to 200 times in surface water leachate, 125 times in groundwater and 5 times in peat. Surface ash leachate had increased concentrations in ammonium (NH4+) and nitrate (NO3-), and through groundwater mobility, the entire fen experienced increased bioavailable N. Mineralization of N and P were minimal at the Burned sites, relative to Unburned sites. Fire affected plant nutrient limitation patterns, switching from dominantly N-limited to NP co-limited in moss and P-limitation in vascular species. Burned site C stock (~14000 kg/ha) was higher relative to the Unburned site, which also increased CN and CP ratios. These findings suggest that long-term effects of elevated C, N, and P concentrations on plant productivity and decomposition must be re-evaluated for fire disturbance to understand the resiliency of peatland biogeochemistry post-wildfire. Environmental controls, including hydrologic, biologic, and edaphic variables modified by the fire and their effect on CO2 fluxes have not been studied holistically. In this thesis, I studied a treed fen burned during the Horse River wildfire in Fort McMurray, AB, comparing CO2 fluxes between a Burned and Unburned area of the fen. We see that both gross ecosystem productivity (GEP) and total respiration (Rtot) were reduced in magnitude at the Burned sites in comparison to the Unburned site, with peak fluxes in the Unburned site occurring in late June, whereas the Burned site CO2 fluxes peaked later in the growing season. GEP and net ecosystem exchange (NEE) increased in carbon uptake in the Burned sites along a depth of burn (DOB) gradient, with the deepest burned areas having an increased potential to uptake more CO2 than the Unburned site. The data also showed that both bioavailable P and moss recolonization were highest in the deepest burned areas. Unburned environmental controls on CO2 fluxes were dominated by soil temperature, whereas the Burned sites CO2 fluxes were controlled by leaf area index. One-year post-wildfire, the deepest burned areas had between 5-200 times greater concentration of P than the Unburned site, the most moss recolonization, and the greatest CO2 uptake, showing that deeper burning could potentially increase the recovery trajectory and resiliency of northern peatlands after fire disturbance.