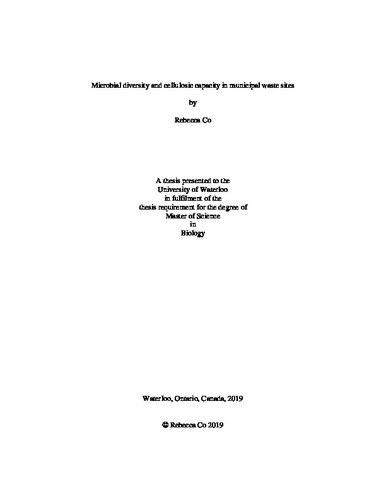 Cellulose is the most abundant organic compound found on earth. Cellulose’s recalcitrance to hydrolysis is a major limitation to improving the efficiency of industrial applications. The biofuel, pulp and paper, agriculture, and textile industries employ mechanical and chemical methods of breaking down cellulose. Enzymatic methods are attractive choices for industry due to their selectivity in their mode of action and high product yields. However, cellulases are not as economic as mechanical means of degrading cellulose, and few cellulases are optimized for large scales. Investigating the cellulolytic microbiome and functional potential of municipal waste sites, which house large amounts of paper waste, can identify novel cellulose degraders robust for industrial applications. The microbial diversity and metabolic potential in landfills have not been well studied. In this thesis, the cellulose degradation capacity was investigated at two municipal waste sites (MWS). First, the microbial composition and the cellulose degradation capacity of a leachate pond from a dump in Jamaica and the river adjacent to the dump were assessed using metagenomics. The diversity of metagenome-assembled metagenomes (MAGs) was greater in the leachate compared to the river, with thirteen high-quality MAGs identified across seven phyla, including Bacteroidetes, Proteobacteria and Firmicutes. In contrast, two high-quality MAGs, both members of the Proteobacteria, were reconstructed from the river metagenome. A MAG assigned to the candidate phylum CPR2 is the first candidate phylum radiation MAG to be reported from a landfill. The metagenomes were screened for genes belonging to glycosyl hydrolase (GH) families containing cellulases as a measure of cellulolytic potential at the sites. Beta-glucosidases were detected at both sites. In the metagenomes, the taxonomic affiliation of most potential cellulases in the leachate metagenome were to the Bacteroidetes, Firmicutes, Actinobacteria, Spirochaetes, and Tenericutes, whereas Bacteroidetes and Proteobacteria cellulases were most abundant in the river metagenome. The microbial composition of the leachate and river did not overlap based on read mapping, suggesting no contamination of the river by the leachate at the times and sites sampled. Secondly, the cellulolytic microbial diversity was also analyzed in six metagenomes from a landfill in Southern Ontario. The samples included a composite leachate cistern (CLC), three leachate wells, and one groundwater well. Twelve GH families containing cellulases were detected across the six metagenomes, with genes from GH3 and GH5 being the most prevalent. Beta-glucosidases and endocellulases were detected across all sites, but exocellulases were only detected in some of the leachate sites and the groundwater well. A large number of hypothetical proteins and non-specifically annotated proteins were also detected across all sites, which likely represent novel carbohydrate-modifying enzymes. The majority of the potential cellulase genes across the six sites were affiliated with the Bacteroidetes and Firmicutes. Thirdly, the potential cellulolytic capacity established from the metagenomes from the Ontario landfill was confirmed by enrichment cultivations of leachate biomass grown in synthetic leachate amended with cellulose. Several isolates from the enrichment cultures showed carboxymethylcellulose and cellobiose degradation capacities, signifying endocellulase and beta-glucosidase activities. Results from 16S rRNA gene amplicon sequencing of copy-paper, cardboard, newsprint, and filter paper-enriched cultures showed enrichment of exact sequence variants assigned to Paenibacillus, Cytophaga, and Proteiniphilum bacteria over time. The research in this thesis represents the first connections between the cellulolytic potential and relevant taxonomic groups in MWS to cellulose degradation by isolates enriched from landfill leachate.