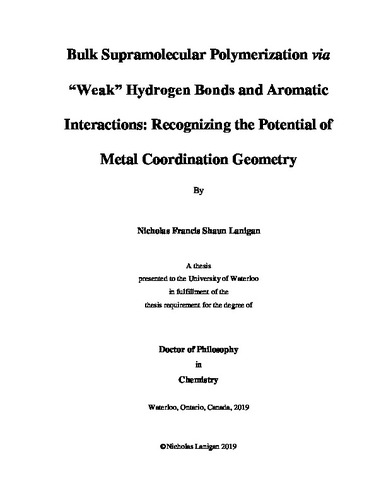 Bulk supramolecular polymers offer an attractive strategy for the development of functional materials. The use of small molecule monomers is of particular interest, because they maximize the potential of a fully reversible polymer backbone. However, the use of small molecules to generate bulk supramolecular polymers has been hindered by the difficulties associated with monomer design. In particular, the tendency of small molecules to crystallize and the lack of understanding of how intermolecular interactions direct the packing of molecules in bulk, make the rational design of novel monomers challenging. To explore the potential of metal coordination geometry, the organometallic molecule CpFe(CO)PPh3CO(CH2)5CH3 (FpC6) was selected as a candidate for use as a monomer to prepare a bulk supramolecular polymer. To elucidate the packing motif and potential intermolecular interactions, crystal engineering of FpC6 was performed. FpC6 forms 5 different crystal structures depending on recrystallization conditions. Crystal engineering revealed that FpC6 interacts through a variety of C—H---O interactions and aromatic embraces, which are influenced by the recrystallization conditions. Depending on recrystallization conditions, FpC6 forms three unique one-dimensional chain structures in the crystalline material. When the crystalline solid-state structure was disrupted by melting, FpC6 displayed typical polymer behaviour, such as the ability to form free-standing films, and fibres could be drawn from the melt. Upon cooling, FpC6 did not immediately recrystallize and instead formed an amorphous solid which could be molded into a variety of shapes. Powder X-ray diffraction of the amorphous solid revealed a distinctive double peak pattern. The double peak pattern matched the inter-monomer distances for a ladder chain structure (identified via crystal engineering) formed by cooperative C—H---O hydrogen bond and aromatic embraces. Differential scanning calorimetry indicated that no recrystallization occurred and that FpC6 underwent a glass transition. These results demonstrated that the C—H---O hydrogen bonds and aromatic embraces are strong enough to stabilize the chain and prevent crystallization. However, FpC6 eventually crystallized over time, indicating that the chains were metastable. The mechanical behaviour of FpC6 was found to be very rich and complex, as it was sensitive to temperature, ageing and thermal/measurement history. Rheological experiments indicated that aged FpC6 demonstrates viscoelastic behaviour, potentially due to the presence of chain entanglements. In order to improve the reproducibility of the mechanical behaviour, the influence of thermal history on FpC6 was investigated to establish a reproducible initial state. Differential scanning calorimetry experiments revealed that the glass transition temperature of FpC6 decreased with increasing upper heating temperature and annealing time, suggesting that the network was not at equilibrium and changed over time. Based on temperature-dependent PXRD experiments of aged FpC6, the decrease in Tg was attributed to the de-polymerization of the supramolecular chains. Annealing FpC6 at temperatures above the Tm indicated that the chains disassembled faster at higher temperatures. Hysteresis experiments showed that no significant polymerization occurred during subsequent cooling or reheating cycles. FpCx (x = 5, 8 and 10) analogues with different alkyl chain lengths were prepared to investigate the effect of alkyl chain length. Preliminary investigation revealed that the FpCx analogues also formed bulk supramolecular polymers with the same chain structure as FpC6. Additionally, as the alkyl chain length increased, the glass transition temperature decreased FpC6 and its analogues are the first reported bulk supramolecular polymers formed via aromatic embraces and weak hydrogen bonding and represent an opportunity for novel monomer design.