What is a field, what is a particle?...what about algebras? 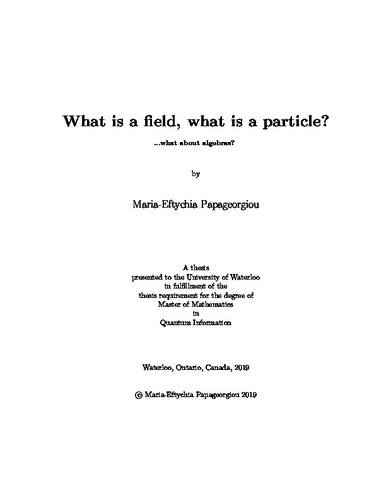 Much of the structure of quantum field theory (QFT) is predicated on the principle of locality. Adherence to locality is achieved in Algebraic QFT (AQFT) by the association of algebras of observables with regions of spacetime. Although, by construction, the observables of QFT are local objects, one may consider characterizing the spatial or spacetime features of a state. For example, if we have a single-particle state in QFT, how can we say that the particle is localized in a certain region of space? It turns out that such a characterization is obstructed by a collection of no-go theorems that we will review in the first two chapters, which imply the absence of any suitable position operator or local number operator in the local algebra of observables. These difficulties, along with other considerations that involve acceleration, gravity and interactions, suggest that relativistic QFT cannot support a particle ontology. The common factor of all these reasons is the theory of relativity, which is commonly blamed for the inappropriateness of the particle notion in relativistic quantum theories. Looking towards low energies, one finds the widespread applicability of non-relativistic quantum mechanics (NRQM), a theory in which particle states are localizable by means of their wavefunction. This seems to imply that NRQM can support a particle ontology, so it is natural to ask whether one can make contact between the NRQM description of particles and some appropriate notion in the latent QFT. Admittedly QFT and NRQM are very different theories, both at the dynamical and kinematical level, and recovering one from the other cannot come with no cost. The main undertaking of this thesis will be to illuminate this connection, by starting with a relativistic QFT and making suitable approximations to recover features of NRQM. Furthermore, it has been suggested that the existence of vacuum entanglement in a relativistic QFT is further obscuring the localizability of states. This is why we are investigating the behavior of vacuum entanglement under the non relativistic approximation to ask whether vacuum entanglement is a relativistic effect.