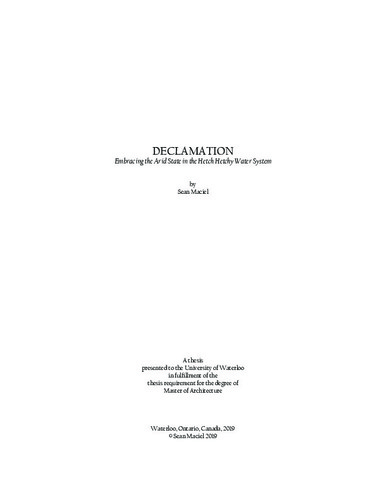 Land reclamation is a form of land management, common in the American Southwest, that seeks to alter arid landscapes through a fabricated re-balancing of the hydrological ledger: taking water from one location, sometimes at great expense and through vast infrastructures, to irrigate a different landscape. San Francisco, looking to flourish in a dry climate, has been the beneficiary of one such reclamation project: the Hetch Hetchy Water System, an infrastructure of remarkable and often-overlooked means. At one end of the system lies Yosemite National Park’s Hetch Hetchy Valley, occupied for thousands of years by indigenous peoples, now dammed and flooded. At the other is the west edge of the San Francisco Peninsula, once covered in endless dunes and now home to Golden Gate Park, the city’s parkland crown jewel. Between these two points, an immense and obscure infrastructure carves gentle lines through thirsty almond groves on its way out to the coast, and the necessity of these decisions go unquestioned. Unfortunately, reclamation may prove to be an inflexible basis for settlement, as climate change begins to manifest signs of stress within the infrastructural system. Meanwhile, contemporary discourse around the future of this system fundamentally fails to question the historic context behind its initial development. Investigating the Hetch Hetchy Water System’s history provides an opportunity to question the future of the system, and the inherent assumptions behind the reclamationist struggle against climate, ecology, and history that justified the project in the first place. This thesis thus seeks to interrogate and subvert the dominant condition of land reclamation in California in the context of changing climatic and political conditions. The extent of the Hetch Hetchy Water System is mapped and explored, and three sites within the larger system –Golden Gate Park, the Central Valley’s San Joaquin Pipelines and the Hetch Hetchy Reservoir – are identified. Following a thorough overview of the environmental and political forces surrounding these sites – including reflections on a series of overlooked proposals from Frederick Law Olmsted, Mary Hunter Austin and John Muir that, in opposing reclamation, ended up on the wrong side of history – this thesis will propose a series of landscapes that seek to reintegrate presently-subsumed ecological forces – sand dunes, seasonal flooding, and Native American land management practices – rather than rejecting them. Drawing on the overlooked alternatives to San Francisco’s reclamation project, these landscapes seek neither to return to a long-lost pristine nature nor to support a purely manmade ecology. Instead, they look to balance the needs and desire of humans against the potential for native ecologies to function resiliently, with the goal of creating enriching and generous environments that sustain us all through the challenging futures to come.