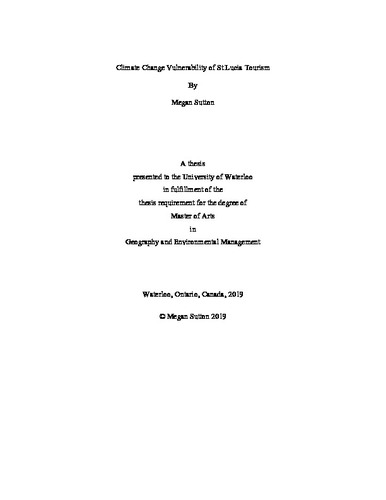 The UN IPCC reports that global annual average temperature has increased by approximately 1°C since the pre-industrial era, and projects that it will rise up to 5.7°C by 2100, depending on the emissions scenario, leading to severe, irreversible impacts on human and natural systems. Climate change is already influencing global tourism and is anticipated to influence future tourism competitiveness and development through four different pathways: 1) direct climate impacts; 2) indirect climate-induced environmental change; 3) indirect climate-induced socioeconomic change; and 4) policy responses of other sectors (Scott, Gossling, & Hall, 2012). Small Island Developing States (SIDS), whose emissions are negligible on the global scale, are among the most likely to suffer from the adverse impacts of climate change. Of the three geographic regions that contain SIDS, the Caribbean has the largest number and is the most tourism dependent. The UNWTO estimates that the Caribbean attracts 2% of international tourists, with sun, sand, and sea (3S) tourism the region’s most dominant product. The Caribbean Tourism Organization and scientific literature recognize six important climate change impacts that could have far-reaching implications for Caribbean tourism: increasing hurricane intensity, sea level rise, water security, changing climate resources, coral bleaching, and carbon pricing. This study examines the vulnerability of tourism in St Lucia to climate change, where the tourism industry significantly contributes to the GDP (42% of total contribution) and employment (51% of total employment). The impact of the aforementioned six main types of impacts were estimated using three phases. First, a scientific and grey literature review was conducted to identify relevant analyses on the impact on tourism assets and infrastructure. Second, a literature review of previous research was conducted to assess possible tourist responses to these impacts, with a focus on research from the Caribbean when possible. Third, the comparative impact on St Lucia relative to 18 CARICOM member states and associate members, in addition to three other top competitors in the region, was assessed in order to estimate St Lucia’s comparative risk in the Caribbean market. Literature on these types of impacts, in addition to primary analysis of historical and future climate data, was used to compare relative impact. Results indicate that St Lucia is substantially less vulnerable to the future impacts of climate change than the majority of Caribbean SIDS. In each of the six impact categories, St Lucia ranks in the lowest third of the 22 islands included. Negative climate change impacts in other Caribbean destinations may provide market opportunities for increased tourism in St Lucia if it can adapt successfully. These findings carry implications for both government and industry. For the tourism industry, the findings can inform tourism operators and tourism investors, and inform their respective climate change adaptation strategies. At the government level, these findings can be used to inform future policy and climate adaptation planning in regards to tourism. Furthermore, this research will contribute to the tourism competitive assessment currently being undertaken by the Government of St Lucia. St Lucia’s relative vulnerability indicates that St Lucian tourism may be made more resilient, with adaptation, than most other islands in the region.