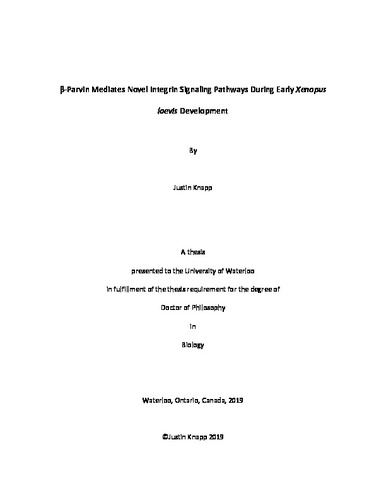 Crosstalk between cell adhesion molecules is critical for the cell rearrangements that occur during early Xenopus laevis development. Cells primarily use integrin receptors to adhere to and interpret the extracellular environment, and cadherin receptors to modulate adhesion between cells. The Xenopus laevis gastrula provides a simple model to examine the molecular processes that regulate adhesion receptor crosstalk as epiboly and convergent extension rely on the modulation of integrin and cadherin adhesion. The adhesive crosstalk of integrin and cadherin is regulated in part by the binding of a shared pool of cytoplasmic molecules to the intracellular tail of these molecules. β-Parvin, a scaffolding molecule, has been described to accumulate at both cell-extracellular matrix (ECM) and cell-cell junctions. β-parvin consists of two calponin homology domains (CH1 and CH2). The CH1 domain was found to regulate the recruitment of β-parvin to cell-cell borders while the CH2 domain mediates the compartmentalization of β-parvin at sites of cell-ECM adhesion. Cell adhesion assays indicate that over-expression of the CH1 domain reduces cell adhesion to a cadherin substrate, whereas over-expression of the CH2 domain reduces cell adhesion to Fibronectin (FN). Furthermore, disruption of β-Parvin signaling inhibits cell intercalation behaviours that underlie epiboly and convergent extension. This suggests that β-parvin plays a role in mediating both integrin and cadherin adhesion. Co-immunoprecipitation analysis indicates that the CH2 domain of β-parvin regulates the association of β-parvin with the C-terminus of Xenopus laevis integrin-linked kinase (xILK). This interaction requires an outside/in signal originating from the ligation of integrin to FN. In addition, the recruitment of β-parvin to xILK is decreased in the presence of Activin A. This suggests that the activation state of integrin controls xILK- β-parvin interactions. The CH1 domain of β-parvin was found to regulate the binding of β-parvin to C-cadherin and β-catenin. GST-pull-down analysis indicates that β-catenin is not required for this interaction. Activin A increases the interaction between C-cadherin and β-Parvin. In addition, β-Parvin interacts with a T-cell factor (TCF)-selective pool of β-catenin known to translocate to the nucleus. Interestingly, the nuclear localization signal (NLS) in the N-terminus appears to regulate the exclusion of β-Parvin from the nucleus. Finally, this study also revealed the existence of a α-parvin homolog in Xenopus laevis. RT-PCR analysis indicates that α-parvin mRNA is expressed throughout early Xenopus laevis development. The present study has for the first time described the molecular mechanisms regulating the function of β-Parvin in integrin-cadherin receptor crosstalk during Xenopus laevis gastrulation. These findings also demonstrate the novel finding that β-parvin actively modulates cadherin mediated cell adhesion.