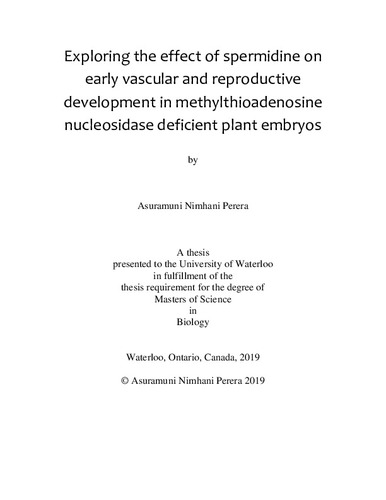 Polyamines (PA) are associated with many critical developmental processes, but their mode of action is not known. Biosynthesis of polyamines, ethylene and nicotianamine produce 5’-methylthioadenosine (MTA) as a by-product. In Arabidopsis thaliana, MTA is hydrolyzed to adenine and methylthioribose (MTR) by two forms of 5’-methylthioadenosine nucleosidase (MTN), MTN1 and MTN2 as part of the Yang cycle. A. thaliana mutants deficient in MTN activity display a complex phenotype that is correlated with accumulation of MTA and an altered polyamine profile. The complete loss-of function MTN mutants are lethal. A mutant with approximately 14% residual MTN activity (mtn1-1mtn2-1) has a pleiotropic complex phenotype including male and female sterility, interveinal chlorosis in young leaves, dark green and twisted mature leaves, reduced auxin transport and vascular abnormalities. A slightly less severe mutant with ~28% residual MTN activity (mtn1-1mtn2-5) is fertile and has a more moderate phenotype. Analysis of developing seeds and reproductive organs of the mtn1-1mtn2-1 mutant revealed its abnormal embryo sac and integument formation as well as undehisced anthers and weak pollen germination. A large scale study conducted to confirm observations made in a previous study showed that exogenous feeding of the polyamine spermidine (Spd) during initial 14 days post germination, can improve the fertility of the severe MTN-deficient mutant. Examining early vascular markers (AtHB8) and auxin response reporters (MP, DR5) in the severe and moderately deficient MTN mutant embryos have shown developmental disruption of vascular tissue and hormone gradients. The findings presented in this thesis showed the effect of Spd supplementation on MTN-deficient mutants in the areas of reproductive tissue development, ovule and pollen health, embryo vascular development and hormone distribution, as well as vascular bundle arrangement in mature main bolt. Severe mutant plants (mtn1-1mtn2-1) supplemented with 100 µM Spd show restored fertility in random branches. The cell arrangement and shape in the integument layers of the mtn1-1mtn2-1 mutant ovules showed significant improvement and pollen viability is also increased. It is proposed that the partial fertility of branches of adult mtn1-1mtn2-1 mutant plants is due to the later release of conjugated Spd, acquired at the very early stages during supplementation. Early vascular marker and auxin response reporter expression in MTN-deficient mutant embryos showed improvement of procambial cell activation and auxin mobility with Spd treatment. Vascular bundle number, shape and arrangement in the main bolt of MTN-deficient mutant plants showed improvements with Spd supplementation. The bundle number was reduced and the arrangement was more symmetrical, restoring a more wild type phenotype. It is possible that Spd supplementation partially restored vascular abnormalities via restoration of auxin distribution at the initial vascular development during embryogenesis. The eukaryotic translation initiation factor 5A (eIF5A) is implicated in vegetative and reproductive growth and development. Spd supplementation during the early development of the mutants showed improvement in both reproductive and vegetative development. The mtn1-1mtn2-5 mutants were phenotypically larger and more robust upon Spd supplementation. This is consistent with overexpression mutants of eIF5A. Other eIF5A mutants have displayed male infertility and poor pollen health. The infertility of the MTN-deficient mutant can be attributed to insufficient availability of active eIF5A due to reduced PA biosynthesis. Taken together these results suggest the existence of a strong relationship between the MTA induced deficiency of Spd and the reproductive and vascular development of A. thaliana MTN-deficient mutants.