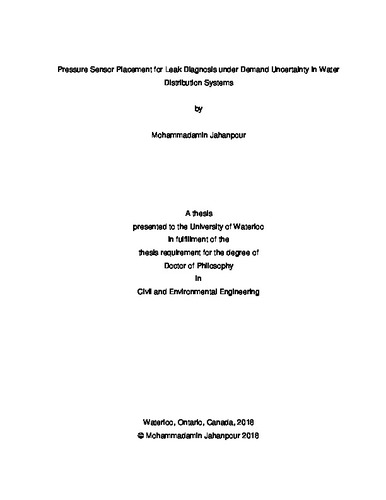 Leakages in concealed pipes in urban water distribution systems (WDS) can cause losses of up to 25% of potable water supply in municipalities. These losses are not only a tremendous waste of water but also the energy spent to treat and distribute it. Techniques for leak detection and localization in WDS have evolved considerably since the mid-1950s. Among these methods, model-based leak diagnosis methods (MFD) have been extensively studied in the literature, as they are more economical compared to others. MFD methods infer the existence and position of leaks based on continuously monitoring pressure levels in the WDS and comparing these to the expected values obtained from simulating a calibrated hydraulic model of the WDS. In the event of an anomaly (e.g., a leak), the sampled pressure levels (measured by the sensors) should significantly deviate from expected values which are obtained by simulation under an assumed no-leak condition. Although the methodology is efficient in terms of the number of required sensors and operational person-hours, it is at risk of failing to distinguish between the effect of leaks and water demand variations. This is because both leaks and demand fluctuations have a similar change on pressure levels along the network. This study aims to improve the robustness of the MFD method by explicitly considering the uncertainty in the nodal demands across the WDS. The influence of demand uncertainty on nodal pressure is analyzed by generating model-based system responses that are time-variable and conditional on known data (e.g., total demand across the WDS). Monte Carlo methods are used to generate conditional realizations of spatially variable sets of nodal demands such that simulated states match the available observed system states at the time any pressure observation is sampled. After characterizing the distributions of expected nodal pressures under the no-leak condition, a statistical detection test is defined that asserts the existence of a leak based on evidence from comparing the observations with their corresponding distributions. The performance of the proposed detection analysis is then evaluated in response to multiple synthetic leak and no-leak scenarios. To fine-tune the configuration of the detection test design parameters, its performance is evaluated by computing the false positive and false negative rates across the leak and no-leak scenarios. These two metrics are utilized to solve the sensor placement optimization problem as a multi-objective optimization problem. Results in two synthetic WDS case studies show that under the most influential source of uncertainty in WDS modelling (nodal demands), the proposed detection test functions well and multi-objective optimization can lead to robust sensor placement and other valuable insights.