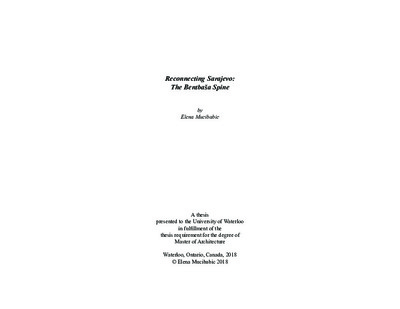 Sarajevo’s Bentbaša, a bathing complex of natural and artificial pools on the Eastern edge of Sarajevo, sits on the brink of the Miljacka River. As a marker of the boundary between nature and the city, the site has been present in the city’s history since the 15th century, prior to Sarajevo’s founding. While Bentbaša has changed consistently in use throughout the turbulent history of the city, it has managed to maintain a sincere neutrality, as a place of pleasure and gathering through the various conquests and socio-political tensions that have ruled Sarajevo and continue to endure today. Between 1992 and 1996, Sarajevo experienced one of the ugliest wars in the modern history. During that period, known as the ‘Sarajevo Siege’, the city was completely cut off, exposed to enormous military destruction and a population left without elementary needs. At the rare times of seize fire, during the hot summer months, Bentbaša remained to be a place where people attempted to find inner peace, alleviate the stress and cool down in the pools or Miljacka river. Unfortunately, after the devastations of the Sarajevo Siege, the area surrounding Bentbaša was left in a state of dissolution. The pools became decrepit, and the entire zone became a place where people in the city do not wander anymore. As a result, Bentbaša today, remains an under-utilized resource for the city. This thesis therefore proposes a re-conceptualization of the Bentbaša site, which has held such a rich place in the history of Sarajevo throughout all times. By re-imagining Bentbaša as a new public path or spine, this thesis will explore the site for its unique potential to engage both the history of the city and its ability to alleviate the tensions and socio-cultural nuances that dominate the city today. Using the architectural gestures of ‘The Path’, ‘The Bridge', and ‘The Pools’, the new Bentbaša spine will emerge. The path will embrace movement, the bridge will suggest connection, and the new pools will become a place to pause, submerge and heal. Thus, by re-enabling Bentbaša to become an important social node, or place of gathering, as it used to be in the past, this thesis will explore how the site can once again become a prominent gateway and juncture between the city, nature, and river which it binds.