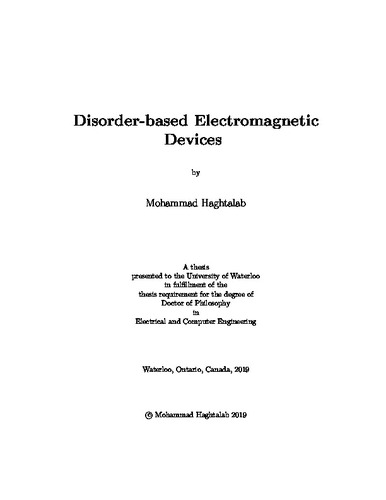 Engineered complex media with unusual and exotic electrical properties, realized through subwavelength building blocks, are leading to the development of new applications and improved functionalities in a variety of fields. These range from electromagnetics- such as frequency selective surfaces, photonic crystals and various forms of the so-called metamaterials to optical microscopy, nanolithography, quantum optics, and medicine. The potential of this area has spurred growing investment by industry and a huge amount of interest from the research community, as they strive to develop novel structures that reduce the cost and improve the performance of existing and emerging systems. At the heart of this development is the engineering of electromagnetic wave interactions with complex structures composed of subwavelength pieces. Thus far, extensive efforts have been made to exploit the advantages offered by the periodicity and combination of different materials with desirable electromagnetic properties at the intended frequency bands. Despite the simplicity provided by periodic structures in terms of design, fundamental limitations are imposed by current fabrication techniques and material losses and imperfections. In response, designs based on disordered structures with exotic properties have attracted wide attention. It has been shown that disorder and aperiodicity can lead to novel applications that are either impossible or too expensive to implement through periodic structures. Examples include omnidirectional anti-reflection coatings, imaging through complex media, localization of light far beyond the diffraction limit, and cloaking devices, to name a few. The extension and development of novel applications based on innovative approaches is clearly of great value. The contributions of the present work, from an analysis and optimization point of view, include a new computationally effcient method to analyze the interaction of electromagnetic waves with complex structures composed of subwavelength scatterers in multilayer media, and the development of a novel design optimization algorithm for fast and efficient design of disorder-based electromagnetic devices. A complex images Green's function technique is employed for the fast and accurate calculation of matrix elements in the method-of-moments used to model the field interaction with optical nanoantennas. A new scheme, for the analysis of multiple scattering in complex systems, and a novel optimization algorithm, called the "near optimal freeform inverse design" (NOFID) approach, are employed to design structures with new functionalities and to improve the effciency in existing/emerging electromagnetic devices. In terms of design and application contributions, the devised analysis method and algorithm are used to design new structures based on engineering the multiple scattering occurring inside disordered systems. More specifically, it is demonstrated that engineered disorder can provide control over electromagnetic wave interactions with designed structures through excitation and optimal selection of desired localized/non-localized modes. Novel contributions include the design of highly coupled optical nanoantennas. The proposed analysis method, based on complex images technique, along with the simulated annealing optimization approach, are used to design disordered nanoantenna structures for optical signals multiplexing and demultiplexing that works by engineering the excited localized plasmonics modes. The developed NOFID algorithm is employed to design disordered dielectric metalenses for super-resolution imaging and communication by controlling the non-localized far- field radiating modes. The analysis of multiple scattering inside a network of disordered highly-coupled nano/micro wires reveals that such structures can be employed to realize self- invisibility or achieve significant localization of incident electromagnetic fields. The invisibility of disordered silver nanowires (AgNWs) with specific geometrical parameters at the millimeter wave range of frequencies is demonstrated. This is achieved through the decoupling of excited modes inside percolated networks of AgNWs. This feature is used to efficiently control the electrical properties of graphene in a millimeter-wave radiating device without disturbing the radiation characteristics of the original radiating structure. Finally, the NOFID algorithm, is employed to design a metastructure composed of metallic wires to demonstrate the enhanced localization of incident waves with various polarizations. This work ends with concluding remarks and provides suggestions for future work.