Wasted Water: Returning to the Fishpond Latrine Amidst Modernity, Pollution, and Stigma 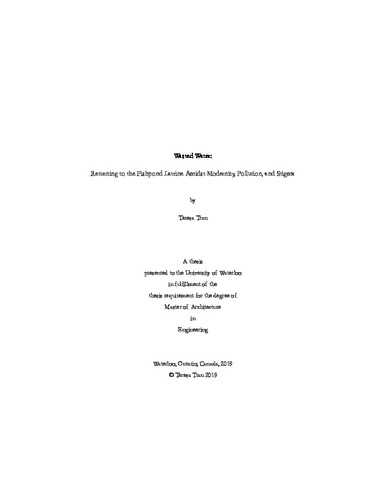 Since 1990, Vietnam has made significant efforts to eradicate open defecation in rural areas. With modernized systems and increasing severity of pollution within its rural provinces, local practices for managing human waste are also condemned as “backwards” and damaging to the environment and sanitary health. Labelled as “unhygienic”, hanging latrines were subsequently banned as an attempt to raise rural standards. Without many alternative solutions for populations living in poverty with insufficient water supplies, this act is viewed as a contentious undertaking to modernize rural Vietnam. Around the same time, flood cycles were also increasingly exploited by high dike fields to meet needs for commercial agriculture. Enabled by Vietnam’s “rice-first policy”, monocrop rice production became dependent on chemical fertilizers, herbicides, and pesticides, severely polluting regional water sources. Former means of nutrient cycling are stigmatized as malpractice—while agriculture is seen as an economic necessity. The result is the displacement of nutrients at two ends: in fields where imported artificial fertilizers replace natural soils, and in households where using human waste is stigmatized and thus cannot be safely integrated into local agricultural systems. Compromised and deemed unsafe for local household usage, open water becomes a threat, continually detaching users from their reliance on the landscape. Set in An Giang province—an anthropogenic delta landscape shaped by its dominant agricultural practices—this thesis uses the premise of a fishpond latrine to challenge the threats of modernity, pollution, and stigma. Based on reflections in Ivan Illich’s H2O and the Waters of Forgetfulness, modern technological advancement combined with sanitation have erased water’s role as a vessel for memory and culture. Sanitation is challenged for reducing water to H2O, a substance concealed within pipes to wash away our waste—resulting in perceptions of water as a polarized substance—strictly being either pure or impure in nature. Mary Douglas’ theory from Purity and Danger: An Analysis of Concepts of Pollution and Taboo complements the views on water’s polarization —where dirt is defined as matter out of place, posing risks and fear resulting in stigma on certain actions and cultures. Based on these theories, the proposal uses the fishpond latrine, a vernacular structure that directly ties household sanitation to the delta’s landscape, as a scalable framework that reinforces nutrient recycling, the connection between water and waste, and the bridging of land uses and household spaces together. Through this framework, a new landscape is proposed where flows are exposed through the restoration of streams and wetlands, and reducing pollution within a newly diversified field through natural cycles and integrated agricultural land use. At a household scale, a spectrum of water cascades through new sanitary spaces, destigmatizing the local practices of economic reuse of resource and conservation. Three settlement and land use typologies for dry, wet, and flood conditions are proposed at multiple scales. With agricultural land use ranging from gardens, orchards, and fields to livestock, aquaculture, and wetlands, these typologies employ adaptive design strategies for household amenities and structures, including the different latrines, for changing land conditions. Countering the efforts to wipe out its existence, the latrine is not removed from the system, but wholly integrated within the larger cycles occurring within the region.