The Logarithmic Derivative and Model-Theoretic Analysability in Differentially Closed Fields 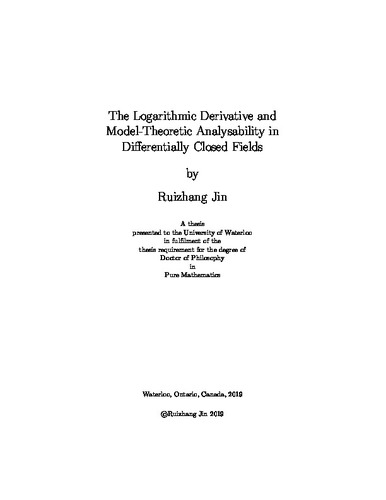 This thesis deals with internal and analysable types, mainly in the context of the stable theory of differentially closed fields. Two main problems are dealt with: the construction of types analysable in the constants with specific properties, and a criterion for a given analysable type to be actually internal to the constants. For analysable types, the notion of canonical analyses is introduced. A type has a canonical analysis if all its analyses of shortest length are interalgebraic. Given a finite sequence of ranks, it is constructed, in the theory of differentially closed field, a type analysable in the constants such that it admits a canonical analysis and each step of the analysis is of the given rank. The construction of such a type starts from the well-known example of δ(logδx)=0, whose generic type is analysable in the constants in 2 steps but is not internal to the constants. Along the way, techniques for comparing analyses in stable theories are developed, including in particular the notions of analyses by reductions and by coreductions. The property of the logδ function is further studied when the following question is raised: given a type internal to the constants, is its preimage under logδ, which is 2-step analysable in the constants, ever internal to the constants? The question is answered positively, and a criterion for when the preimage is indeed internal is proposed. Partial results are proven for this conjectured criterion, namely the cases where the group of automorphisms (the binding group) of the given internal type is additive, multiplicative, or trivial. In particular, the conjecture is resolved for generic types of equations of the form δx=f(x) where f is a rational function over the constants. It is discovered that the related problem where logδ is replaced by δ is significantly different, and the analogue of the conjecture fails in this case. Also included in this thesis are two examples asked for in the literature: internality of a particular twisted D-group, and a 2-step analysable set with independent fibres.