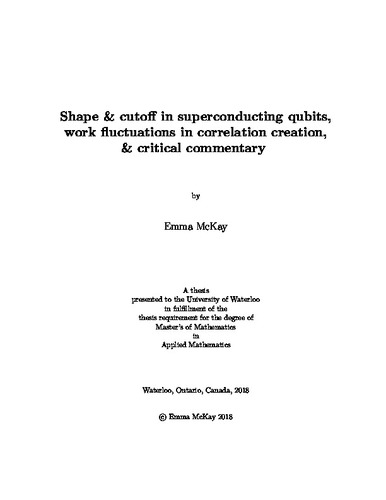 Part I We apply the Unruh-DeWitt model for a qubit interacting with a quantum field to a superconducting qubit. We use the flexibility of this model, as compared to the spin-boson model used widely in the literature, to investigate the effect of an ultraviolet cutoff in the field and the finite size of a qubit on the dynamics of a qubit. In studying these features in the setup of a qubit coupled to an infinite transmission line, we find that both the shape and scale of the ultraviolet cutoff have a significant effect on the qubit’s dynamics. For experimentally reasonable parameters, we estimate that using an inaccurate model for the ultraviolet cutoff present in the line could introduce errors in calculation of probability of spontaneous emission of the qubit of around 10%. This is particularly interesting in light of the fact that superconducting lines have natural ultraviolet cutoffs due to the breakdown of superconductivity for high frequency electromagnetic waves. Part II We investigate a unitary protocol to create correlations in a bipartite quantum me- chanical system. The protocol was initially motivated by its optimal average work cost. We calculate the fluctuations in the work cost and show that for maximal generation of correlations, the fluctuations in the work cost are of the order of the average work cost, making the protocol energetically rather unreliable. We additionally explore some of the nuances of the discussion around work in quantum systems with discussion of the current literature as well as some philosophical motivations of the most widely used definitions of work. Throughout the thesis, we comment on the motivations for this research and its effect on our world. In doing so, we find multiple ways that supporting the project of developing quantum technology supports injustice. We also model a methodology for engaging with societal and ethical implications of work in theoretical physics.