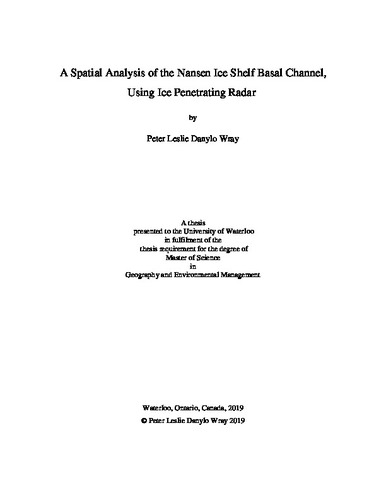 The stability of floating ice shelves in the Antarctic is of great concern as their current thinning and future collapse will release mass from grounded ice sheets into the ocean, contributing to sea level rise. The study of sub-ice shelf environments is essential for understanding ice-ocean interactions, where warming ocean temperatures have already begun to reduce the mass of Antarctic ice shelves through enhanced melt. Obtaining direct measurements of the sub-ice shelf cavity remains challenging. This thesis demonstrates that ground-based and airborne Ice Penetrating Radar (IPR) can deliver high resolution geospatial data of sub-ice shelf features, which can be used to observe: ice draft and surface morphology, vertical melt rates, and hydrostatic balance of the ice shelf. In November 2016 and January/February 2017, IPR surveys were completed over the Nansen Ice Shelf in Terra Nova Bay, Antarctica. Surveys examined an ocean-sourced basal channel incised into the bottom of the ice shelf. Results reveal a 6 - 10 km wide, 90 m high basal channel, with 20 m high sub-channels. Data from 2011 and 2014 airborne IPR surveys are compared to the November 2016 ground based IPR to calculate a dozen direct measurements of vertical melt rate values within the channel. Melt was focused more on one channel flank, away from the channel center in local apexes. Many of the detected features were not in hydrostatic equilibrium as calculated from surface elevations, indicating the need for more radar determined ice thickness measurements to fully characterize basal channel morphology and monitor future melt.