It's Terminal: Architecture of Obsolescence 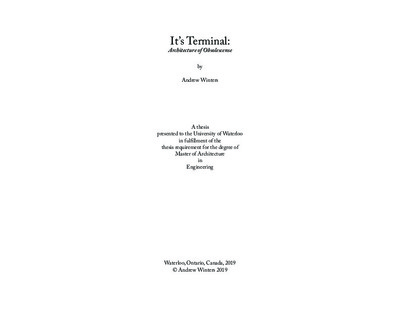 There’s always been one here. There’s the one that’s here now, there’s the one that it replaced, and there’s also the first one that didn’t last so long. One hundred and sixty odd years there’s been one here, in this place. There’s no reason for it to be here anymore though. The traditions and heritage it was a part of are gone. It’s the only thing of its kind for a long distance, but it has no purpose. People are torn. Most believe it should stay, even without any use. Others think it’s in the way, think something better could be here in its place. It’s the Collingwood Terminals and grain elevator, an old relic hogging the coastline on Georgian Bay. It’s an industrial concrete structure that’s far outlived its use. It was never meant to be an icon, or a monument, or a landmark, but it’s called all of those things now, and nobody can figure out what to do with it. It’s halting progress on the waterfront, and the clock is ticking. Soon, something will happen to it, the fear is it will be the wrong thing. Many people are interested in it, but they want to wreck it. Either by tearing it down, or worse, by butchering it so much that it’s unrecognizable. I hope to stop them. Show them a better way. This thesis is meant to show them how.