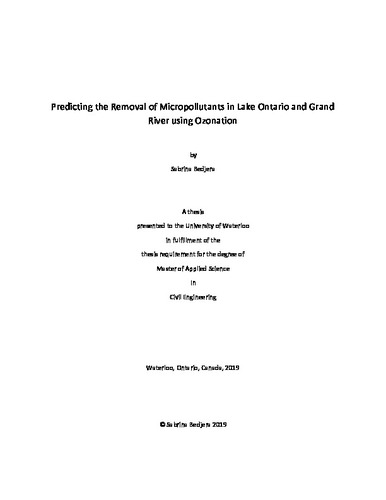 Micropollutants occur at low concentrations (µg/L to ng/L), can have a range of environmental and health effects, and can enter surface water through run-off from fields and wastewater discharge. Surface water is used for drinking water production and therefore, it is crucial to remove any micropollutants during drinking water treatment. Ozonation is an effective treatment process for degrading micropollutants involving the use of ozone (O3) which also decomposes to produce the hydroxyl radical (●OH). The Rct value, a unitless parameter, represents the ratio of ●OH to O3 exposure and is a water characteristic. The Rct value is a crucial component of the micropollutant degradation model. However, implementation of this model has often been done under baseline or limited conditions. The primary objective of this thesis was to use this model to predict how effective the ozonation process was for three different drinking water treatment plants for a range of micropollutants and seasonal conditions. Seasonal Rct values were determined from measurements in water samples taken just prior to the ozone contactors of the 3 participating utilities using low and high applied ozone doses (1 and 4 mg/L). Water quality parameters as well as ●OH and O3 decay curves and therefore Rct values were found to vary among the three treatment plants and the seasons. Rct values ranged from 10-8 to 10-9, which were consistent with the literature. Rct values for the 1 mg/L applied ozone dose were more varied among the three treatment plants than Rct values obtained with the 4 mg/L applied ozone dose. Pearson correlation analysis was used to investigate correlations of all water quality parameters and applied ozone dose with the Rct values. Ozone dose had the strongest significant correlation, p<0.05, with the Rct value with a value of -0.70 while temperature and pH both had moderate correlations. A step-wise linear regression indicated that ozone dose and temperature were important factors to model the Rct value with an R2 value of 0.70. The micropollutants microcystin-LR (MC-LR) and atrazine were then chosen to validate the micropollutant degradation model representing fast and slow reacting compounds respectively. The validation with atrazine was successful with a better fit for the 1 mg/L applied ozone dose than for the 4 mg/L dose. Temperature modifications improved the fit for the 4 mg/L applied ozone dose, but did not make a difference for the 1 mg/L dose. Early deviations occurred between the simulated and experimental results and were hypothesized to be attributed to the inability to measure ozone degradation in the first phase. The Rct value, rate constants, and ozone exposure were then input into the model to simulate micropollutant degradation. Temperature and pH modifications were employed to ensure that the model could be used under a variety of seasonal conditions. The rate constants of O3 and ●OH with the cannabinoids ∆9-Tetrahydrocannabinol (THC) and cannabidiol (CBD) were predicted with quantitative structure-property relationship (QSPR) models, since they were not available in the literature. Both compounds were found to be fast-reacting with both of the oxidants. Simulations showed that degradation of benzene, toluene, ethylbenzene and xylenes (BTEX) and atrazine was highest in Lake Ontario, which was likely due to its water quality e.g. lower dissolved organic carbon (DOC). Simulations for the cannabinoids THC and CBD and the cyanotoxins MC-LR, anatoxin-a (ANTX), and cylindrospermopsin (CYN) showed fast and complete removal in all three treatment plants under all seasonal conditions studied. Individual BTEX compounds were degraded according to their rate constants with ozone with benzene having the lowest percent removal and the xylenes having the highest. In an assumed spill scenario, benzene was rarely removed below its regulated level in Canadian drinking water while ethylbenzene was removed in all water sources below the regulated value except for one simulation. Overall, this thesis shows that the micropollutant degradation model can be used to predict how effective the ozonation process is in specific drinking water treatment plants. Seasonality was considered by sampling throughout the year and by employing temperature and pH modifications, which increased the applicability of this model to better simulate real world treatment situations. The use of previously developed QSPR models to predict reaction rate constants of micropollutants makes it possible to apply the micropollutant degradation model to basically any micropollutant of interest to a utility.