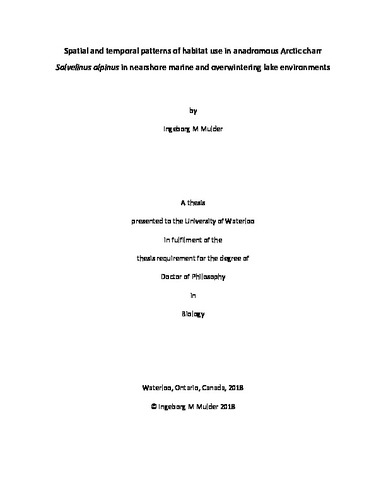 Even though anadromy is integral to the life history of the Arctic charr (Salvelinus alpinus) in many northern regions, little is known about what shapes the patterns of anadromy. Moreover, little is known about the habitat use (e.g. temperature use and/or depth distribution) in relation to movement activity, especially during the overwintering freshwater residency period. An improved understanding of their behaviour in both freshwater and the marine environment will improve our understanding of how a cold-water specialist, such as Arctic charr, may respond to a changing climate, given the predicted and observed climate changes and existing hypotheses about its likely consequences for northern fishes. Accordingly, anadromous adult Arctic charr from two populations located near the southern end of the species distributional range have been studied in 2012, 2014 and 2015, to investigate the spatial and temporal patterns of habitat use in the nearshore marine and overwintering lake environments using passive acoustic and archival telemetry methods and a mixed effects modelling framework. Research has focussed on movement activity of anadromous Arctic charr while overwintering in freshwater lakes. Results showed that movement activity declined markedly during the ice-covered period, with low movement activity suggesting only opportunistic maintenance feeding as an energy conservation strategy. Movement activity was negatively correlated with body length, with smaller individuals being more active than larger conspecifics. Although general movement activity patterns were evident, there were significant differences among individuals, particularly in the spring immediately prior to lake departure. Lake size and individual differences in metabolic rate may account for some of this variation. Photoperiod strongly influenced the decline in movement activity in late autumn and, in combination with ice breakup, the increase in movement activity in spring. Arctic charr utilized a narrow temperature window (0.5-2°C) during the ice-covered period and used cooler temperatures available within the middle to upper water column. Use of the selected lower temperatures is indicative of a strategy to reduce metabolic costs and minimize energy expenditure, preserving stored lipids for overwinter survival and the energetic costs of preparation for seaward migration. As Arctic charr are visual feeders, use of the upper water column is thought to aid foraging efficiency by increasing the likelihood of prey capture. In addition to seasonal movement patterns, this thesis also focussed on diel activity patterns. Arctic charr were observed to display diurnal activity patterns throughout the overwinter residency period, likely driven by prey and light availability in the upper water column where daylight facilitates foraging efficiency by increasing the likelihood of prey capture. Movement activity increased as a function of temperature, except during winter, where cold-water temperatures associated with increased activity were likely a by-product of (opportunistic) feeding behaviour immediately below the ice. The utilization of warmer water temperatures when activity was reduced was thought to occur for the purpose of improving assimilation efficiencies in winter and preparing for outmigration during the ice breakup period. During the marine migration, Arctic charr utilized warmer ambient water temperatures available in the upper water column, possibly to aid in physiological processes such as digestion, whereas deeper depths were suggested to be used for feeding purposes. Size-dependent thermal preferences were evident, with larger individuals utilizing cooler water temperatures compared to smaller individuals, a pattern of temperature use suggestive of ontogenetic changes in thermal habitat use for the purpose of growth maximization. Diurnal patterns of diving activity were interpreted to reflect the vertical migration of prey items and/or to be related to the visual capabilities of Arctic charr as daytime feeding likely remains more profitable in terms of rapid food acquisition and minimization of foraging costs. Dive duration was dependent on body size with smaller individuals performing shorter dives to maintain their core temperature and abilities to both effectively capture prey and avoid predation. This thesis is the first to provide observations of movement activity and thermal habitat use in adult anadromous Arctic charr while overwintering in freshwater lakes, and to directly test and observe size-dependent thermal preferences in Arctic charr at sea. Together, the findings of this thesis have made an important contribution to the winter ecology and marine migration of anadromous adult Arctic charr and lays the foundation for assessing future climate change effects on Arctic charr populations in Canada and elsewhere.