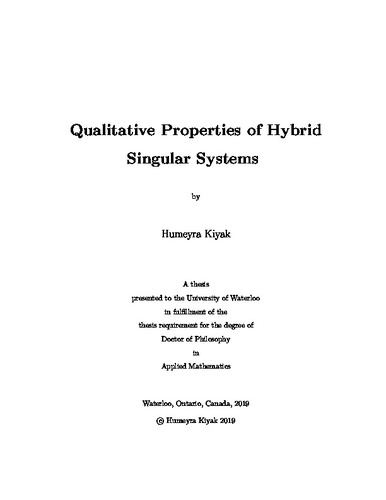 A singular system model is mathematically formulated as a set of coupled differential and algebraic equations. Singular systems, also referred to as descriptor or differential algebraic systems, have extensive applications in power, economic, and biological systems. The main purpose of this thesis is to address the problems of stability and stabilization for singular hybrid systems with or without time delay. First, some su cient conditions on the exponential stability property of both continuous and discrete impulsive switched singular systems with time delay (ISSSD) are proposed. We address this problem for the continuous system in three cases: all subsystems are stable, the system consists of both stable and unstable subsystems, and all subsystems are unstable. For the discrete system, we focus on when all subsystems are stable, and the system consists of both stable and unstable subsystems. The stability results for both the continuous and the discrete system are investigated by first using the multiple Lyapunov functions along with the average-dwell time (ADT) switching signal to organize the jumps among the system modes and then resorting the Halanay Lemma. Second, an optimal feedback control only for continuous ISSSD is designed to guarantee the exponential stability of the closed-loop system. Moreover, a Luenberger-type observer is designed to estimate the system states such that the corresponding closed-loop error system is exponentially stable. Similarly, we have used the multiple Lyapunov functions approach with the ADT switching signal and the Halanay Lemma. Third, the problem of designing a sliding mode control (SMC) for singular systems subject to impulsive effects is addressed in continuous and discrete contexts. The main objective is to design an SMC law such that the closed-loop system achieves stability. Designing a sliding surface, analyzing a reaching condition and designing an SMC law are investigated throughly. In addition, the discrete SMC law is slightly modi ed to eliminate chattering. Last, mean square admissibility for singular switched systems with stochastic noise in continuous and discrete cases is investigated. Sufficient conditions that guarantee mean square admissibility are developed by using linear matrix inequalities (LMIs).