Displace and Urbanized: Or Why We Build 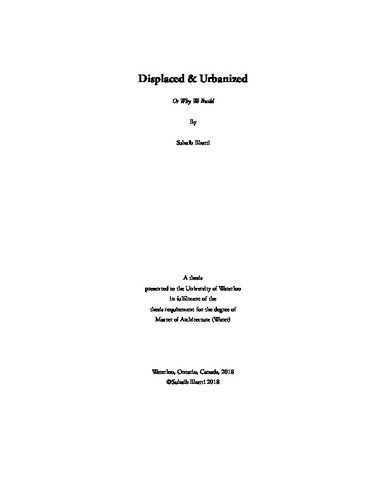 I embarked on this research with the aim to study the relationship between the city and the flood, understanding the waterfront as some blurred edge where wild and human forces mix. My hope was to propose a design strategy for urban waterfronts, which define a critical border between the order of the city and the chaotic, disruptive force of the flood. Initially, I wanted to outline some toolkit which could be applied to the unique conditions of any urban waterfront of the world. It became clear that I would need to choose a site amongst hundreds of cases, otherwise my brief studies of the globe’s urban watersheds would remain relatively shallow. For a number of anomalous reasons, I settled on the Indus Valley and its watershed, together composing one of Earth’s most violent landscapes. The more I studied the valley for symptoms, like a doctor looking for the underlying conditions of a place, the more I realized that the kind of design method I initially hoped to uncover would be impossible. To adequately frame the chaotic valley would prove to be enough of a challenge. Any constructed timeline would have its gaps, and any design to solve the plethora of urban or water issues in the Indus would need a plan of execution which would border the fantastical or horrific, for the valley consists of a series of wicked problems which generate further anomalies with any solution. Any prescription is temporary and comes with much uncertainty, especially in the Indus where the average economic value of each citizen is measured under $6000 per year, leaving many citizens with little agency and room for long-term investment. The desire for a design was replaced with a desire for answers, then a desire for the right questions. I began trying to re-conceptualize the valley through its history of catastrophe, constantly reconfiguring fragments until the gaps in the valley’s narrative became the main markers of an alternate history defined by anomalous forces that re-structure society. This research unifies fragmented histories of the valley towards a critique of dominant paradigms of space-making, indentifying the need for alternative practises of architecture that can anticipate or cultivate the transformative and anomalous nature of civilization.