Participant-Specific Modelling of the Proximal Femur during Lateral Falls: A Mechanistic Evaluation of Risk Factors 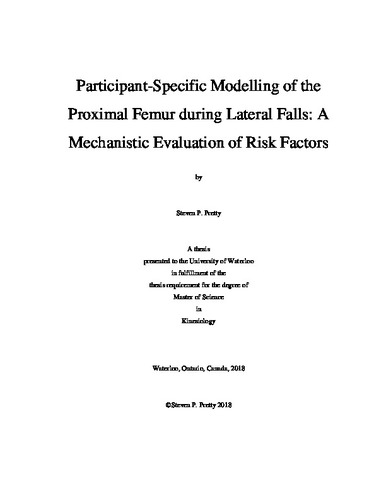 Falls among older adults are a common occurrence with the potential to result in substantial injury. Hip fractures are among the most frequent and devastating fall induced injuries, resulting in increased morbidity and mortality, as well as significant socioeconomic costs. From a mechanistic perspective, the risk of a hip fracture during a fall is dictated by the ratio between the impact loading and the ability of the femur to withstand such loads. Investigations of clinical fracture risk factors have generally focused on the latter, neglecting the influence of these factors on impact dynamics. Experimental fall simulations provide a means to investigate factors modulating impact dynamics; however, these studies are limited to the skin surface with limited ability to draw conclusions on femoral loading and fracture risk. Investigations into the mechanical basis of clinical risk factors (sensitive to both loading and femur morphology) could provide insights to inform the development of protective devices and increase the accuracy of screening tools. Therefore, the purpose of this thesis was to evaluate the influence of previously identified hip fracture risk factors on impact characteristics during lateral falls and how the application of these loading conditions influence femoral neck stresses and fracture risk. Specifically, the influence of fall simulation paradigm (FSP: a surrogate for fall type), sex, and trochanteric soft tissue thickness (TSTT) were evaluated through coupling of experimental impact dynamics with participant-specific proximal femur models. Healthy young males and females, encompassing a wide range of body compositions underwent a series of fall simulation paradigms. These paradigms varied in fall trajectory and impact configuration, ranging from highly controlled vertical drops (pelvis release) to releases more representative of falls observed in older adults (kneeling and squat releases). Peak impact force magnitude and localization over the proximal femur, as well as orientation and point of application with respect to the femur were extracted (Chapters 3 and 4). A subset of the participants subsequently underwent dual energy X-ray absorptiometry (DXA) imaging, enabling participant-specific modelling and tissue level analysis - driven by experimental loading conditions (reginal force magnitude, orientation, and point of application; Chapter 5). FSP significantly influenced skin surface loading conditions, as well as femoral neck stresses and fracture risk. Compared to kneeling and squat, pelvis release elicited lower peak force magnitude; however, this force was applied closer to and was more concentrated over the greater trochanter. Despite the differences in force distribution, kneeling and squat release still elicited greater force directed over the proximal femur compared to pelvis release. Beyond force magnitude and distribution, these FSP varied significantly in impact vector orientation with respect to the femur. Kneeling release was associated with the most perpendicular loading vector, while squat release elicited the most distally directed vector in the frontal plane. In the anterior-posterior plane, pelvis release was directed posteriorly, while kneeling and squat release were directed anteriorly. Observed difference in skin surface loading conditions across FSP interacted with underlying femoral geometry to influence stress generation and fracture risk. Compressive stress at the superior-lateral femoral neck was greatest in kneeling release, while tensile stress at the inferior-medial femoral neck was greatest in squat release (driven by proportion of force resulting in axial compression vs. bending stress). While no differences in femoral neck fracture risk were observed between kneeling and squat release, kneeling release may elicit a greater risk of local compressive failure in the superior femoral neck. At the skin surface, sex and TSTT significantly influenced impact dynamics; however, underlying differences in femur morphology influenced the translation of these loading conditions to femoral neck stresses and fracture risk. Compared to females, males exhibited greater impact force magnitude, which was applied closer to and was more concentrated over the greater trochanter of the proximal femur. This increased loading in males was mitigated by differences in femur morphology (greater resistance to bending and shear stress generation, as well as strength), resulting in no differences in femoral neck stresses or fracture risk. The increased risk of hip fracture in females may be explained by age related changes in femur morphology, as well as sex-differences in the circumstances of falls. High-TSTT individuals exhibited greater impact force magnitude; however, these loads were applied further from and less focally over the greater trochanter compared to low-TSTT individuals. Combined, no differences were observed in the amount of force directed over the proximal femur across TSTT. Despite similar loading conditions, low-TSTT individuals elicited greater femoral neck stresses and fracture risk compared to their high-TSTT counterparts, driven by differences in underlying femur morphology (reduced resistance to bending and shear stress generation). The protective influence of TSTT to redistribute impact force peripherally away from the greater trochanter appears to play an important role in fracture risk. When global impact force was utilized instead of local force during modelling, no differences in femoral stresses or fracture risk were observed across TSTT. In summary, this thesis combined two previously exclusive approaches (experimental fall simulations and tissue level modelling) to gain novel insights into the influence of FSP, sex, and TSTT on femoral neck stresses and fracture risk. Through a participant-specific multi-level approach, this analysis was sensitive to both impact dynamics and underlying femoral geometry. FSP influenced fracture risk, as well as the location and magnitude of peak femoral stresses. Inclusion of muscle activation in future versions of the current approach may inform ‘safe-falling’ strategies, designed to reduce fracture risk. The current results support epidemiological findings suggesting TSTT is a protective factor against hip fracture; however, sex differences in fracture risk are likely driven by age related changes in femur morphology not included in this analysis. Based on the apparent importance to fracture risk, future work should aim to quantify the translation of skin surface pressure distributions to impact energy delivered to the proximal femur.