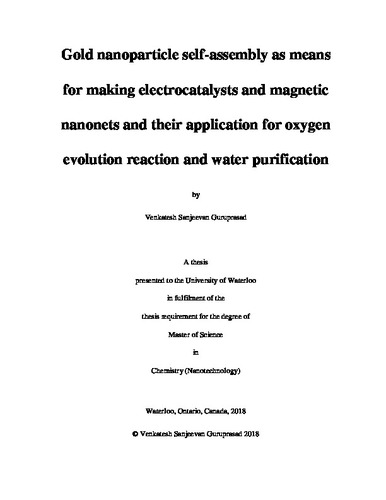 Gold nanoparticles (AuNPs) are widely researched materials in nanotechnology due to their distinct properties like surface plasmon resonance and ability to self-assemble. Citrate capped gold nanoparticles assembled into chains using multivalent cations are used for multiple applications such as sensing, water purification and catalysis; hence their study is of importance. Knowledge of the parameters which affect self-assembly will help to optimize and control the self-assembly process. We research using various experimental techniques how the self-assembly depends on ionic strength, the dissociation constant of the citrate and the type of ion used for the assembly process. Self-assembly of Au nanoparticles with Fe ions (Fe2+/Fe3+ in 1:2 molar ratio) is used to develop magnetic nano-nets similar to fishing nets for capture and removal of microbes in aqueous medium. The nano-nets have a high aspect ratio, span microns in length with openings of 80-300 nm. This allows them to sample the liquid medium even at low volume fraction and also entrap the microbes in the solution. The nets and the trapped microbes can be effectively pulled from the solution by using an off the shelf magnet. Since the capture is based on physical contact, the nano-nets overcome the ability of the microbes to develop resistance to the cytotoxic effects of chemical compounds and nanomaterials. Using the nano-nets an absolute inactivation of 0.9 is achieved in 5 min. in a non-deaerated solution with Escherichia coli (E. coli). Further the removal of the nano-nets along with the captured microbes also predominantly eliminates the nanomaterial from the aqueous medium for future use. Further, we research the catalytic properties of self-assembled Au cobalt oxide chains for the Oxygen Evolution Reaction which is a half reaction of water splitting. Micron sized branched 3-D networks of AuNP are formed with cobalt oxide linkers. The self-assembled structures help to effectively disperse the catalyst and provide an easy fabrication process for our catalyst. The gold template enhances the conductivity of our cobalt oxide catalyst due to the formation of conductive gold chains. In addition, our catalyst exhibits low overpotential of 430 mV (at 10 mA/cm2 current density), high turnover frequency (TOF) of 0.07 s-1 (at 400 mV overpotential) and a very low Tafel slope of 30 mV/dec as compared to many previous works. Stability of our catalyst has also been evaluated.