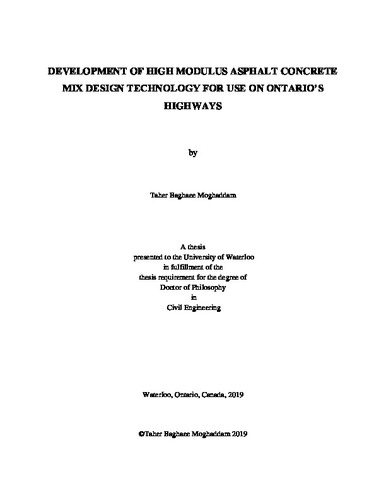 Asphalt pavement is subjected to external loads including mechanical loading induced by traffic and thermal loading induced by thermal variations. The last decades have witnessed a significant rise in number of heavy vehicles especially commercial trucks with higher axle loads on rural and arterial roads in Ontario. Consequently, by increasing the number and amplitude of traffic loading and severe environmental condition, servile life of asphalt pavements has been adversely affected. In many cases, premature distresses were occurred before expected service life of asphalt pavements reaches to its end. On the other hand, new pavement materials, design procedures and construction technologies have been developed worldwide. One of these technologies is “Enrobé à Module Élevé- (EME)” or “High-Modulus Asphalt Mix”. EME is a type of asphalt concrete that represents high modulus/stiffness, high durability, superior rutting performance and good fatigue resistance. This type of mix was developed in France in the 1980’s. EME is a very good option to be used in lower and upper binder courses in the pavement structure which are subject to the highest levels of tensile and compressive stresses. EME offers several advantages over conventional binder course materials including reducing the thickness of the pavement structure with improved service life and reduction in raw materials consumption. Despite the excellent performance at higher and intermediate temperatures, traditional EME mixes would be very susceptible to low-temperature cracking which is associated to using very hard grade asphalt binder. In addition to the cold climate condition, some other aspects such as traffic volume, vehicle attributes, properties of raw materials, construction methods, and testing standards are specific to Ontario. Based on the aforementioned reasons, adopting EME technology will be beneficial to Ontario’s highways. However, development of a suitable EME mix design procedure in Ontario cannot be a duplicate copy of the French method, or any other methods used in other countries or jurisdictions. This study, funded by the Highway Infrastructure Innovation Funding Program (HIIFP-2015), aims to introduce a new approach to EME mix design that contributes to good performance at high, medium and low temperatures. This could be achieved by using premium aggregate particles with dense structure (high packing density), along with utilizing high quality asphalt binder with precise content in the mix. A performance-based mix design approach is developed for EME mix design in Ontario which is a modified version of Superpave mix design procedure. Compressible Packing Model (CPM) was used for the first time to optimize the packing density of aggregate particles for two categories of mixes (12.5 mm and 19 mm Nominal Maximum Aggregate Size (NMAS)). Three types of modified asphalt binders were also considered: PG 88-28, PG 82-28 and PG 58-28 + modifiers (Elastomer additives). In addition to measuring compaction ability (compactibility) of the developed mixes, several thermo-mechanical testing methods were designated to be used in this study to evaluate the performance of asphalt mixes at different levels. Results of this study showed that the CPM-obtained gradation limits were within the grading control points of EME mixes recommended by French specification. The asphalt mixes had higher compactibility than the conventional mix, and, EME 19 was more compactible than EME 12.5 although it had less binder content than EME 12.5. Complex modulus test results illustrated that the mixes had high modulus values, and that the values of EME 19 were generally higher than those of EME 12.5. Hamburg wheel track rutting test results showed both mix types had superior rutting performance. Fatigue performance of developed mixes was assessed using four-point bending beam fatigue test at different strain levels to develop fatigue curves. The test results showed that the minimum strain level to meet 1,000,000 cycles of fatigue life (ε6) was more than 300 μm/m for all the mixes. Additionally, Thermal Stress Restrained Specimen Test (TSRST) results showed that the cracking temperatures of the developed mixes were less than -25˚C; and that EME 12.5 performed slightly better than EME 19. Binder microstructure and rheological properties were assessed using environmental scanning electron microscope (ESEM) and dynamic shear rheometer (DSR) equipment respectively. Two springs, two parabolic elements and one dashpot (2S2P1D) rheological model is used to model and compare the viscoelastic behavior of the binders as well as the mixes. ESEM test results showed that microstructure of PG 88-28 binder was the densest and connected with thicker fibril size. PG 58-28 + Elastomer additives had highly intertwined structural network with the thinnest fibril size among the binder types. 2S2P1D results showed it is a powerful tool for modeling highly polymer modified asphalt binders as well as EME mixes. According to developed master curves the mixes’ moduli have followed the same pattern as for the binders’ although phase angles’ patterns were different. Correlations were found between the binders’ microstructures and their rheological properties. Binders with denser structure and stronger bonds showed to have lower phase angles. Although binders with more intertwined structural network had higher modulus particularly at higher frequencies. The EME mix design approach was validated by using the second source of aggregate materials and PG 82-28 asphalt binder. The SGC compactibility test results showed that the mixes were more compactible than the conventional Superpave mix. According to the rutting test results, the mixes had almost not rut after 20,000 wheel passes on the submerged specimens at 50°C (rut-depth < 1 mm). In addition, the developed mixes with the second source of aggregates had relatively higher fatigue resistance where ε6 values were greater than 550 μm/m for both EME 12.5 and EME 19. TSRST results also depicted that the cracking temperatures of both mixes were below -30°C.