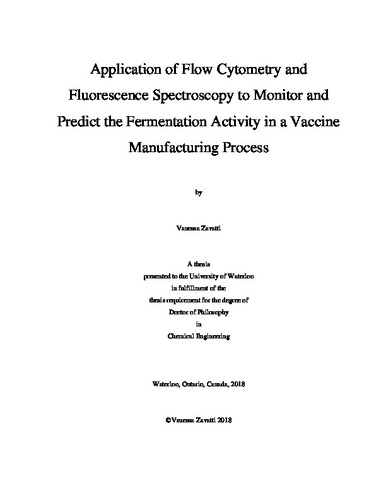 Bordetella pertussis is a Gram-negative coccobacillus, pathogenic and aerobic bacterium responsible for causing whooping cough, which is an upper respiratory tract infection in humans. To prevent this disease whole cellular and acellular vaccines have been developed. Acellular vaccines are generally preferred since they are less reactogenic. For these vaccines, different antigenic compositions are currently available in the market where some of them are based on one antigen (pertussis toxin or PT), two antigens (PT and ﬁlamentous hemagglutinin (FHA)) or five antigens. The latter is referred to as five component pertussis (5CP) composed of PT, FHA, pertactin (PRN) and two fimbriae units (FIM2 and FIM3). This research was motivated by preliminary results found in the analysis of the upstream fermentation and downstream purification of PRN in the manufacturing process of whooping cough vaccine at Sanofi Pasteur (Toronto, Canada). By combining fluorescence measurements and multivariate statistical analysis it was found that the levels of NADPH present in the supernatant were negatively correlated to productivity of PRN, and that downstream purification protocols can be dismissed as a cause for low productivity. The importance of these results is that accumulation of NADPH is known to be related to oxidative stress. These initial results led to the hypothesis that low productivity may be related to the occurrence of oxidative stress during fermentation. For this reason, this research focused on the effect of oxidative stress on growth of B. pertussis and PRN productivity. The research plan involved a parallel investigation that included analyses of samples collected from the large scale train of fermenters at Sanofi Pasteur, and samples from lab scale fermentations performed to mimic the observed behavior in large scale fermentations. Because the fermenters are tightly controlled in terms of dissolved oxygen (DO), pH and temperature, it was hypothesized that the observed variability in PRN may be related to the heterogeneity of the cell population in the fermenters. To investigate this hypothesis flow cytometry was used to quantify the heterogeneity in the cell population and its effect on growth and productivity. The data acquired was processed using multivariate statistical methods, such as Principal Component Analysis (PCA), and Partial Least Squares (PLS) to compress data and eliminate noise. Bench-scale experiments were conducted in flasks, 2 L and 20 L bioreactors. Oxidative stress was induced either by the addition of H2O2 or by the use of small size inoculum. These experiments served to confirm the correlation between high NADPH in the supernatant and high reactive oxygen species (ROS), the effect of oxidative stress on PRN, growth, and a mechanism of adaptation to stress. A mathematical model considering elements of the B. pertussis metabolic network was built to explain this observed adaptation. The comparisons of the flask and bioreactor cultures indicated that closed-loop DO control appears to exacerbate oxidative stress compared to open-loop (e.g. in shake flasks fermentations). In the bioreactors, DO is controlled by a closed-loop mechanism through manipulation of agitation or aeration rates. When H2O2 was added to the culture, it was converted to oxygen by the action of catalase and thus the agitation decreased to maintain the oxygen at set point, likely resulting in a decrease in mass transfer, and reduction of metabolism and growth. Following these arguments, samples from the entire train of production fermenters of increasing volume (20 L, 200 L, and 2000 L) were analyzed by means of flow cytometry. The PCA model showed clear correlations with the distributions of ROS and scattering from samples at different time points from each fermentation to the corresponding PRN yield at the end of the purification. As a result of this study, it was concluded that oxidative stress is correlated with productivity similar to the observations made for the lab scale experiments. A possible source of oxidative stress might be variability in media and growth factor composition, or length of time for media sterilization. This conclusion was reached after investigating the effect of media sterilization cell growth after external imposition of stress. Furthermore, growth in fermenters with low productivity showed a slower biomass evolution compared to fermenters with high productivity, even though the final optical density was the same for all cultures. These differences in growth are similar to the ones observed for small scale experiments where adaptation to stress was clearly observed. By means of PLS, it was possible to build regression models for predicting the final concentration of PRN from distributions of cells at different time points for the 2000 L fermentation. The PLS regression model between the weighted average of the ROS cytometry distribution and the final productivity had a smaller correlation as compared to the model that used the entire distribution. These results appear to demonstrate that measurements of population distributions are a better indicator of fermentation state rather than average measurements as per the original hypothesis. Due to the central role that NADPH plays in this system, the nature and origin of NADPH in the supernatant was further investigated. It is believed that NADPH observed in the supernatant is bound to catalase. Bench scale experiments showed that fluorescence excitation/emission spectra of catalase has similar fingerprints to those observed for fluorescence spectra acquired from the supernatant of production samples. The proposed flow cytometric method was found to be a suitable indicator of the state of the fermentation and as a method to predict productivity. Future work will be required to identify the exact source of variability in the production of PRN.

Vanessa Zavatti (2019). Application of Flow Cytometry and Fluorescence Spectroscopy to Monitor and Predict the Fermentation Activity in a Vaccine Manufacturing Process. UWSpace. http://hdl.handle.net/10012/14321