Development and Application of Models and Diagnostics for Geophysical Fluid Flows 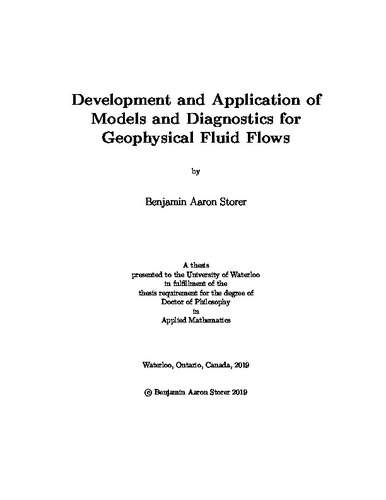 This thesis presents the development and application of numerical tools for simulating and diagnosing quasi-geostrophic fluid systems. In this thesis we present a new numerical model called SPIQG that is pseudo-spectral but also allows for a channel geometry and correctly computes the evolution of the zonal transport while maintaining spectral accuracy. There are numerous numerical models that simulate the non-linear evolution of the continuously stratified Quasi-Geostrophic (QG) system, and many of these models are pseudo-spectral in order to achieve high-order accuracy in the spatial discretization, but those typically assume a doubly-periodic geometry. SPIQG is built using the framework provided by SPINS, a spectral and parallel model for simulating the 3D incompressible, non-hydrostatic, Boussinesq Navier-Stokes equations. This framework provides powerful MPI-based parallelization in order to perform large-scale simulations in high powered computing environments. To validate this model, we present the results from various test cases, including quasi-geostrophic turbulence, jet destabilization, and vortex destabilization. The spectral accuracy allows for the total energy to be very well conserved as well as providing accurate calculation of power spectra, spectral fluxes, and anisotropy metrics. Next, we propose a spectrally computed diagnostic for spatial anisotropy: a measure of the extent to which a field exhibits a bias between different orientations. The diagnostic is presented in the framework of fluid dynamics, but can be applied to any field for which Parseval’s theorem applies and to which discrete Fourier, sine, or cosine transforms can be applied. The proposed metric provides both a local, or per-wavelength, measure of anisotropy, as well as a global measure. In order to determine when the anisotropy of a system is significant, the anisotropy of white noise is diagnosed both analytically and numerically. This reference anisotropy then provides a statistically sound method for determining if the observed field is significantly more or less anisotropic than noise. An idealized geophysical fluid dynamics simulation is used to illustrate the diagnostic power of the proposed metric. These tools are then applied to study the stability of lens-shaped vortices. We compute the stability characteristics with higher accuracy and for a wider range of Burger numbers (Bu) than what was previously done. It is found that there are four distinct Bu-regions of linear instability. Over the primary region of interest, 0.1 < Bu < 10, we confirm that the first and second azimuthal modes are the only linearly unstable modes, and they are associated with vortex tilting and tearing respectively. Moreover, the most unstable first azimuthal mode is not precisely captured by the linear stability analysis because of the extra condition that is imposed at the vortex centre, and accurate calculations of the second azimuthal mode requires higher resolution than was previously considered. We also study the non-linear evolution of lens-shaped vortices in the context of this model and present the following results. First, that vortices with a horizontal length scale a little less than the radius of deformation (Bu > 1) are barotropically unstable and develop a wobble, whereas those with a larger horizontal length scale (Bu < 1) are baroclinicly unstable and often split. Second, the transfer of energy between different horizontal scales is quantified in two typical cases of barotropic and baroclinic instability. Third, after the instability the effective Bu is closer to unity.