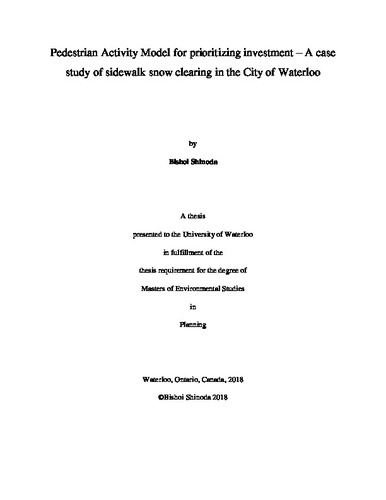 This research emphasizes the needed integration for the empirical field of pedestrian modeling and the practical field of public works services. This is illustrated by focusing on the winter sidewalk maintenance delivery standards in Canadian municipalities, which often suffers from a mismatch with the spatial distribution of pedestrian activity. As a response, the first objective of this research is to predict the spatial distribution of pedestrian activity. This is done by reviewing five approaches to pedestrian modeling and demonstrating an understanding of the built environment and non-built environment variables that influence pedestrian demand. Based on common shortcomings to each approach, an analytical approach is proposed and used to construct a Pedestrian Activity Model (P.A.M.) predicting daily walking trip count per neighbourhood, with the City of Waterloo as the case study area. Building on this, an analysis of the highest classes of the constructed P.A.M. is utilized to suggest a Pedestrian Priority Zone. This addresses the second research objective, which is to identify high foot traffic areas to construct a priority zone for delivering enhanced and efficient winter sidewalk maintenance. Between the two tested regression types, the Spatial Error Regression (SER) is a better fit in capturing daily walking trips. Of the seven explanatory variables considered, only Transit Activity, Metric Reach (sidewalk connectivity), and Elementary and Secondary School Student Enrollment variables are significant under the SER model. As a result, the Pedestrian Activity Model is founded on the SER model and the 3 significant variables. The highest pedestrian activity class is found along University Avenue between University of Waterloo and Wilfrid Laurier University, while the second highest is found around the Uptown. A single Pedestrian Priority Zone is suggested based on amalgamating the three highest P.A.M. classes. While the results are context-specific, the methodology is transferable. The process of constructing the predictive model can be used to validate other existing pedestrian models. Also, constructing a Pedestrian Activity Model could be an essential piece to decision making not just for enhancing public works services, but also for recommending new infrastructure connections, prioritizing streetscape enhancement projects, encouraging commercial and retail development, and boosting Real Estate market.