In-vitro selection, characterization and application of a silver-specific DNAzyme 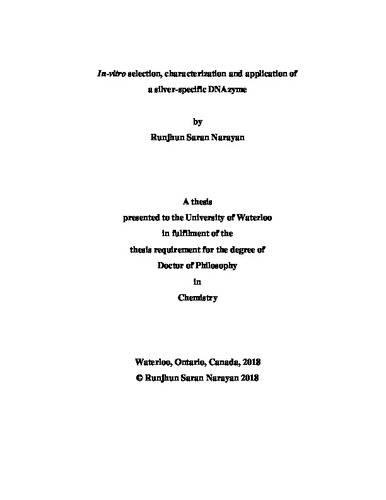 Evolution of novel DNA-based catalysts (DNAzymes) through in-vitro selection has expedited the research by manifolds, in both fundamental and analytical aspects of bio-nanotechnology. DNAzymes are attractive for their high stability, high catalytic efficiency and ease of modification. Among the known DNAzymes, those cleaving RNA have attracted most attention. Many of the known RNA-cleaving DNAzymes recruit multivalent metal ions for successful catalysis, while the catalytic involvement of monovalent metal ions yet remains underexplored. Before this thesis work, only a few monovalent ion-dependent DNAzymes are known (e.g. Na+-dependent EtNa and NaA43), and therefore, I was interested in exploring monovalent transition metals, such as silver. In this thesis, an Ag+-dependent selection experiment and its outcomes are described. In Chapter 1, relevant background information on DNA and DNAzymes was introduced, and the current state-of-the-art of the field was reviewed. In chapter 2, a new RNA-cleaving DNAzyme named Ag10c with a well-defined bulged hairpin structure was isolated after six rounds of in-vitro selection. The selection was performed using Ag+ as the intended target metal, and Na+ was present in the selection buffer to maintain the ionic strength of the buffer. This DNAzyme shows remarkable selectivity for Ag+, and attains a maximum speed of 0.41 min-1 in the presence of 10 µM Ag+ in buffer 50 mM MOPS (pH 7.5) and 200 mM NaNO3. This discovery expands the repertoire of metal-dependent RNA-cleaving DNAzymes and also draws much needed attention to the role of monovalent ions in DNAzyme catalysis. In chapter 3, the DNAzyme Ag10c was studied in extensive detail. The study revealed that most of the nucleotides in the catalytic loop are significant for activity. This study confirmed that Ag10c bears a well-defined silver aptamer in its catalytic loop, and it can fold into a compact structure by binding Ag+. Most nucleotides in the catalytic loop are highly conserved and mutations to them often dropped the activity by over 1000-fold. Using salt-dependent catalytic activity measurement, it was found that Ag10c was more active in buffers with higher NaCl concentration. However, other tested DNAzymes were inhibited by such salt. In addition, phosphorothioate modifications were made at the scissile phosphate. Based on these biochemical data, it was established that this Ag10c DNAzyme needs two metals for catalysis: one Na+ (or other group 1A metals or Mg2+) binds to the pro-Rp oxygen of the scissile phosphate, and two Ag+ ions bind cooperatively to Ag10c aptamer loop. It was also reported that Ag10c undergoes a single deprotonation step during catalysis. The investigation of Ag10c-Ag+ binding has been further characterized with fluorescence-based folding studies using 2-aminopurine as a probe. This study provides a new aptamer for Ag+ which is completely different from the well-known C-Ag+-C structure, and floats a new theme of DNAzyme catalysis that may be used by soft metals to escape interaction with the scissile phosphate and yet confer effective catalysis. In chapter 4, the DNAzyme Ag10c was used to develop a highly sensitive analytical probe for silver. This study reports a FRET-based system with the DNAzyme Ag10c for sensing low concentrations of Ag+ ions, with the limit of detection being 24.9 nM, which is far below the permissible limit of silver in water by WHO. The study exhibits that amongst the metals tested i.e. 100 mM, 10 mM and 100 μM of most of the group 1A metals, few of group 2A metals and many of the divalent transition metal ions respectively, the sensor is exceptionally selective for Ag+ ions. This study also demonstrates the robustness of the sensor in real world samples i.e. in Lake Huron water. This study puts forth a rare example of DNAzyme beacons being used for sensing of monovalent ions, and highlights the possibility of using DNAzyme beacons for sensing transition metal ions up to low nanomolar concentrations. In addition to the work pertaining to the silver DNAzyme, in-vitro selection was also performed on another toxic heavy metal, lead. A very short DNAzyme PbE22 was obtained. This DNAzyme consists of only 5 nucleotides in its catalytic loop and shows excellent selectivity for Pb2+. This part of information is presented in the Appendix A (chapter 6) of the thesis. Previously known Pb2+-specific DNAzymes, 17E and GR5, have also been characterized. By performing systematic mutations in their catalytic cores, and side-by-side comparison of both, four highly conserved nucleotides in both DNAzymes playing similar roles were identified and it was deciphered that they share the same activity pattern. This part of information is presented in the Appendix B (chapter 7) of the thesis. In summary, in-vitro selection is a powerful tool to obtain interesting metal-specific DNA sequences. This work has expanded the previous work to a monovalent heavy metal, silver. By studying Ag10c, a new mechanism of DNAzyme catalysis was revealed.