Dark Matter and Neutrinos in the Foggy Universe 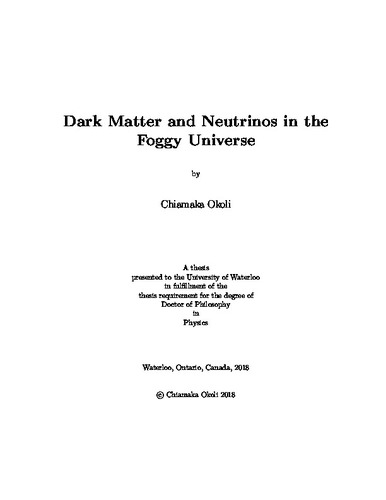 Dark matter is predicted to be the main contribution to the matter content in the universe, in addition to ordinary baryonic matter such as protons and neutrons. However, we are limited in our knowledge of the nature of this main content of matter and some of its characteristics, hence the term "the Foggy Universe". The majority of the work included in this thesis is related to dark matter. It includes an investigation of the characteristics of dark matter haloes -- structures expected to hold the galaxies/clusters -- and a proposal to effectively search for dark matter particles through dark matter annihilation products such as gamma rays. In the last part of the thesis, we include a novel large-scale effect of cosmological neutrinos on haloes in the universe that is dependent on the neutrino mass. In more detail, this thesis is a collection of the contributions we made to cosmological research regarding the nature of dark matter. Motivated by the non-existence of halo concentrations for small mass haloes due to the poor mass resolution of N-body simulations, we propose and verify the agreement of an analytical mass-concentration model using the ellipsoidal collapse theory and assuming the conservation of total energy. Thereafter, and guided by the success of this prediction, we use this model to make analytical calculations that may be relevant for the indirect detection of dark matter particles using gamma-rays as by-products of dark matter annihilation. We consider noise estimates to include the expected gamma rays due to the formation of stars in the galaxies hosted by these haloes and the presence of the isotropic gamma-ray background to predict a signal-to-noise ratio as a function of halo mass in a bid to pinpoint the most interesting halo masses that should be good targets for this detection. Given that neutrinos are the second most abundant particle in the universe after the photons, we finish off by quantifying the effect of dynamical friction from primordial neutrinos that may slow down haloes and presented how this effect may be extracted from galaxy surveys using different galaxy species in redshift space. Although independent of the number density of galaxies in the survey, the confidence level of this proposed detection is dependent on the survey properties -- such as the number of galaxies, mean redshift of the survey -- and the neutrino properties such as the mass and hierarchy of the species and could be greater than $3 \sigma$ using an optimal survey.