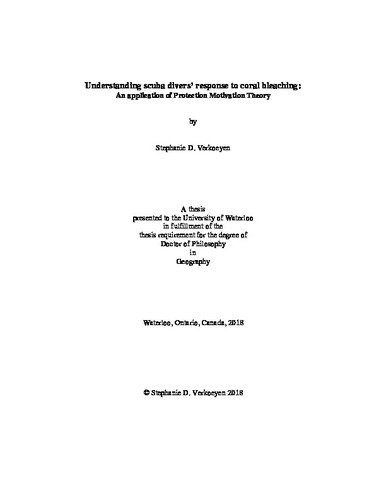 Numerous studies have shown that healthy coral reefs are important to the dive experience. Thus, the expected increase in frequency and magnitude of coral bleaching events has the potential to alter global flows of dive tourists. There is disagreement about how coral bleaching might affect tourists’ dive-related behaviour, nor is it clear why one form of substitution might be preferred over another. While previous research has sought to explain tourists’ or recreationists’ behaviour by considering an individual’s commitment to an activity and/or place, there is a growing number of studies that suggest taking people’s estimation of their options and ability to react to a threat into account provides a clearer picture of the decision to respond to a threat. Application of such a cognitive framework may also provide new insight to the question of how place attachment and activity involvement transmit their effect on behavioural intentions. This study applied Protection Motivation Theory (PMT) to help understand the motivational factors associated with intended adaptation to a coral bleaching event. An online survey was sent out to Australian and Canadian dive club members to assess PMT constructs in relation to six behavioural intentions and attachment variables. Multiple regression analysis and mediation analysis was used respectively to analyse the effects of threat and coping appraisal variables on behavioural intentions and consider their mediating influences for attachment variables. This study provided the first empirical evidence of scuba diver adaptation in response to marginal reef conditions, indicating that the majority of respondents would significantly alter their behaviour in some way. PMT was able to explain between 12.8% and 47.7% of the variance in behavioural intentions, with response efficacy and self-efficacy consistently emerging as the strongest significant predictors, highlighting the importance of including some measure of subjective adaptive capacity. Consideration of multiple behavioural intentions demonstrates the variability of model performance and highlights the need to consider the context of adaptation behaviour when interpreting results. Canadian divers perceived dive reduction to be more effective and had a greater perceived ability to alter their dive rate than Australian divers, whereas Australian divers were significantly more likely to change the location of diving within a destination or within a region, suggesting there may be differences in the perception of available local or regional alternatives. Perceived severity is a significant negative predictor of cognitive behavioural intentions for Australian divers, possibly because Australian divers showing a significantly greater emotional attachment to place. This study did not support the notion of PMT as a useful extension of place activity and activity involvement effects in terms of additional explained variance, but did offer some insights into competing and indirect effects when considering attachment- behaviour models beyond that of place attachment-spatial adaptation/activity involvement-activity adaptation. Overall, greater attachment typically predicts less ability to perform an adaptation and less perceived effectiveness of an adaptation, suggesting adaptation may be perceived to be of less utility to activity or place-attached individuals. Implications for future research and the dive tourism industry are discussed. As the majority of respondents indicated an intention to significantly alter their behaviour in some way, the economic ramifications of coral bleaching are likely to be significant. Further, tourists’ tendency towards spatial adaptation is an important consideration as a contributor to greenhouse gas emissions. Ultimately, PMT presents a useful framework for policy makers, destination marketers, and investment developers to consider the elasticity of dive tourism demand in the mid-to-long term, which can inform decisions about capital investments and supply-side adaptations. Several methodological limitations are discussed and recommendations for further research are suggested, including further qualitative research to provide contextual information for the different response variables, and consideration of adaptations in supply-side factors.