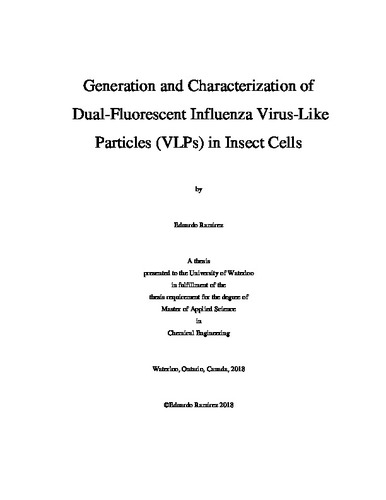 The Baculovirus Expression Vector System (BEVS) has been widely used to produce recombinant proteins, especially for complex biopharmaceuticals. In recent years, the insect-baculovirus system has proved its value as a robust production platform. In this regard, multiple vaccines have been commercialized such as FluBlok® using this system. The work presented here aims to further explore their use on the production of influenza virus-like particles (VLPs). The goal is to successfully produce fluorescent influenza particles that behave similarly to native particles and that allow the purification of viral particles. Four different genetic constructs were investigated for the expression of dual-fluorescent influenza VLP. Individual influenza genes were fused to different fluorescent proteins. Hemagglutinin was fused with enhanced green fluorescent protein (GFP), whereas, M1 was fused to a red fluorescent protein (RFP). The use of monomeric or multimeric RFP was studied, as well as, the fusion site to M1. HA-GFP was placed under the baculovirus p10 promoter, while M1-RFP was under the control of the baculovirus polh promoter. Sf9 cells were used to generate baculovirus vectors that were later used to infect Sf9 cells and produce the influenza VLPs. Flow cytometry and confocal microcopy were used to detect individual levels of influenza proteins and their localization. within the cell. A proposed downstream process consisting of a 2-step concentration procedure and a density gradient purification for influenza VLPs was evaluated by tracking HA activity and baculovirus presence. Purification of VLPs and baculovirus was achieved by using iodixanol and sucrose density gradients, an undesirable result since baculovirus is the main contaminant produced in the production process. Further sample analysis of purified fluorescent particles was performed by flow cytometry. Our findings showed that recombinant baculovirus driving the expression of M1 fusions, with either monomeric or tetrameric RFP, in the 3’ site presented red fluorescence localized at the center of the cell. The same behavior was observed when a monomeric RFP was fused at the 5’ site. Further purification of fluorescent VLP constructs showed lower HA activity of fluorescent constructs when compared with a non-fluorescent VLPs. Moreover, iv similar migration patterns were obtained via sucrose density gradient. However, the need to add more purification procedures such as ion exchange chromatography are needed to fully isolate influenza VLP particles. Lastly, a flow cytometry protocol to study purified particles was evaluated. Nano-sized fluorescent particles were detected in purified samples, which increased particle counts in samples with higher concentrations of HA activity and baculovirus. However, our analysis detected mainly coincidental events. Single particle events overlapped with signal noise, therefore an increase in the inherent fluorescent of viral particle should be explored to differentiate single particles from signal noise.