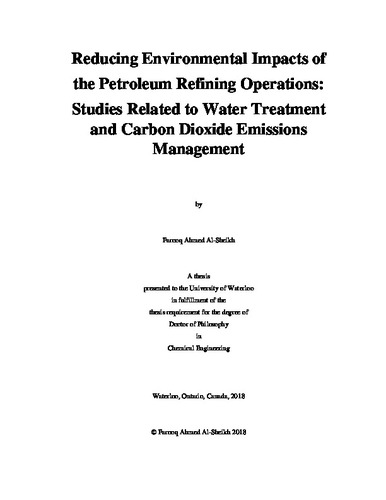 Petroleum refining is one of the most important chemical processing industries, converting crude oil into many usable and useful products, but it can cause adverse environmental impacts. Two environmental issues were addressed: i) reducing ammonia concentrations in wastewater and ii) reducing selected carbon dioxide emissions using carbon capture technology. Ammonia removal during waste water treatment is important because of its potential toxic effects in aqueous environments. Although biological treatment is generally favourable, its application in cold climates is ineffective due to slow kinetics. An adsorption process is one viable alternative process that can be used to reduce ammonia concentrations, and accordingly 10 commercial ion exchange resins and 6 zeolites were tested to assess their effectiveness for the removal of ammonia from real polluted water samples (3.8 to 8 mg/L NH3−N) containing other cations. In subsequent tests, the performance of six selected adsorbents was further characterized using Langmuir, and Freundlich isotherm and pseudo-1st, and pseudo-2nd order kinetic models. The results showed that the Dowex resin was best characterized by the Langmuir isotherm while LEWATIT resin, AZLB-Na and NV-Na zeolites were by the Freundlich one. Also, each adsorbent was best characterized by pseudo-2nd order kinetics. Adsorbent equilibrium capacities in the range of 0.2 to 0.4 mg/g were determined for ammonia concentrations of approximately 1 mg/L. Because of its high selectivity towards ammonia, a LEWATIT S 108 H resin was tested to assess its effectiveness in the batch and continuous adsorption of ammonia from the real wastewater. Batch adsorption tests were conducted using different masses of LEWATIT for 22.7 mg/L (NH3−N) wastewater and the equilibrium data so obtained were characterized using Langmuir and Freundlich isotherms to obtain model constants. Continuous adsorption tests were then carried out in two different sized fixed-bed-glass columns to obtain breakthrough curves. Also, ammonia desorption from LEWATIT was achieved using (5:100 w/v) HCl with an efficiency of approximately 50%. The Bohart-Adams and Thomas models were used to fit the experimental breakthrough curves for finding model parameters. The results show that the LEWATIT performance can be well-characterized by both the Bohart-Adams and Thomas models in the fixed-bed column. For comparison, a column was loaded with the AZLB-Na zeolite to generate a breakthrough curve, and the desorption process was achieved using sodium hydroxide. Bohart-Adams and Thomas models were employed to find model parameters that would describe the breakthrough curve of the adsorption process. These were then compared with experimental results, showing good agreement. With respect to carbon dioxide emissions, the Fluid Catalytic Cracking (FCC) unit was the focus because it causes the bulk of the CO2 emissions in a refinery (around 30%). Simplified mathematical models were derived using static and dynamic heat balances of both the reactor and regenerator. The main purpose of studying dynamic responses was to find the most influencing flow rates and their lower/upper limits to ensure that reactors/regenerator temperatures work within normal operating conditions, which are used as side constraints in the optimization technique. In the regenerator where combustion takes place, two systems were examined: post-combustion and oxy-combustion since percentages of the CO2 content differ. In an oxy-combustion system, the CO2 captured will not only be sequestered but also will be used as a side stream to the FCC unit since the operation will be continuous.