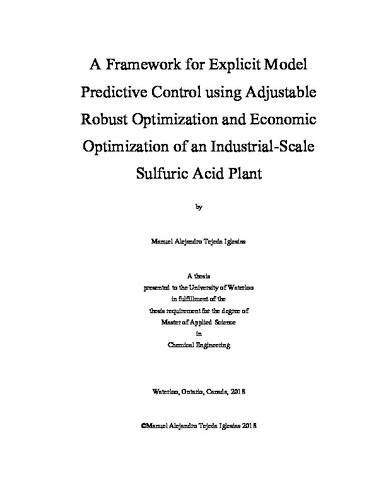 Optimization plays an important role in the operation of chemical engineering systems. Due to their typical size, different optimization tools and techniques are required to improve the efficiency in process operations. In this thesis, a mathematical tool is developed to address the issue of optimal control for linear systems under uncertainty. Also, a comprehensive plant model describing the behaviour of an industrial-scale Sulphuric Acid plant is developed to assist in identification of the optimal operating conditions under uncertainty Model predictive control (MPC) is considered an attractive strategy for the optimal control of complex chemical engineering systems. Conventional MPC involves solving an optimization problem online to determine the control actions that minimize a performance criterion function. The high computational expense associated with conventional MPC may make its application challenging for large-scale systems. Explicit MPC has been developed to solve the optimization problem offline. In this work, adjustable robust optimization (ARO) is used to obtain the explicit solution to the MPC optimization problem offline for discrete-time linear time invariant systems with constraints on inputs and states. In the robust model formulation an uncertain additive time-varying error is introduced to account for model uncertainty resulting from plant-model mismatch caused by un-measurable disturbances or process nonlinearities. The explicit solution is an optimal time-varying sequence of feedback control laws for the control inputs parameterized by the system’s states. The control laws are evaluated in a time-varying manner when the process is online using state measurements. This study shows that the resulting control laws ensure the implemented control actions maintain the system states within their feasible region for any realizations of the uncertain parameter within the uncertainty set. Three case studies are presented to demonstrate the proposed approach and to highlight the benefits and limitations of this method. The optimal operating condition to which an optimal controller will drive a large industrial-scale plant is identified using a different set of tools. In this thesis, an industrial-scale sulfuric acid plant is considered. The production of sulfuric acid is an important process due to its many applications and its use as a mitigation strategy for Sulphur dioxide (SO2). The reactor of the sulfuric acid plant has been the focus of many studies, and thus there has been very limited works in the literature that have analyzed the complete sulfuric acid plant. In this work, the flowsheet for an industrial-scale sulfuric acid plant with scrubbing tower is presented. The model is developed in Aspen Plus V8.8 and it is validated using historical data from an actual industrial plant. A sensitivity analysis was carried out, followed by optimization using two alternative objective functions: maximization of plant profitability or productivity. The optimization was extended to consider uncertainty in key operating and economic parameters. The results show that changes could be made in the current optimal operating condition of the plant to improve the annual profit of the process.