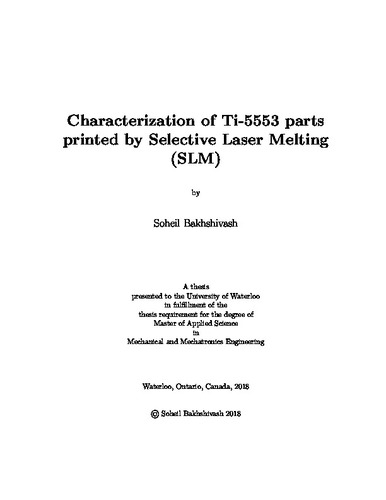 Nowadays, titanium alloys are widely used in a variety of industries like automotive and aerospace due to their high strength to weight ratio. Ti-5%Al-5%V-5%Mo-3%Cr is a metastable near beta titanium alloy with excellent fatigue performance and corrosion resistance. Hence, it is mainly used in the airframe structure and the landing gear components. As the additive manufacturing (AM) industry grows everyday, so does the interest in printing of strategic Titanium alloys. Selective Laser Melting (SLM) is a powder-bed fusion process utilizing the laser power as the heat source which scans over a compact powder layer along a pre-de fined path. In this study, the printability of Ti-5553 by pulsed-laser SLM is investigated, thoroughly. To this end, a batch of powder was first characterized in terms of size distribution, porosity level, chemical composition and microstructure. Afterwards, the effect of Volumetric Energy Density (VED), sample geometry and scanning strategy was evaluated on the microstructure and properties of the printed parts. Various tests such as Archimedes method, Nano-CT scanning, surface roughness, Optical Microscopy (OM), Scanning Electron Microscopy (SEM), Transmission Electron Microscopy (TEM), X-ray diffraction (XRD), Electron backscattered diffraction (EBSD) and hardness mapping were applied. Results showed that the virgin plasma-atomized powder had a high quality with a mean sphericity of 0.95 and porosity of less than 0.01%. In addition, it was observed that there was an optimized VED range leading to a nearly fully dense part, i.e. 99.7%, with a smooth surface. Low and High VEDs resulted in a lack of fusion and spattering, respectively, both undermining the density of the printed parts. Moreover, high VEDs provided the energy required for the beta to alpha transformation and caused in-situ precipitation hardening. This in-situ heat treatment is not desired due to the lack of homogeneity. Furthermore, the sample geometry, i.e. cubic or cylindrical, was determined to have negligible effects on the achieved properties while the choice of scanning strategy directly affected the texture and density of the printed parts. It was seen that the chessboard, stripes and total ll strategies led to the optimized, medium and poor properties, respectively. Finally, the best density of 99.94% was achieved by using the VED of 112 J/mm3 and the chessboard scanning strategy. The sample showed a homogeneous hardness distribution with an average of 295 ±10 HV. The TEM analysis determined that the sample was in the beta to omega phase transformation stage. Also, it had a columnar grain structure elongated parallel to the building direction indicating a highly crystallographically textured part. The EBSD analysis supported these fi ndings by suggesting a preferred growth direction with crystal texture seven times higher than the random intensity. The melt pool shape of the optimized sample was seen to be goblet-like with a lower penetration compared to the sample printed by the stripes strategy.