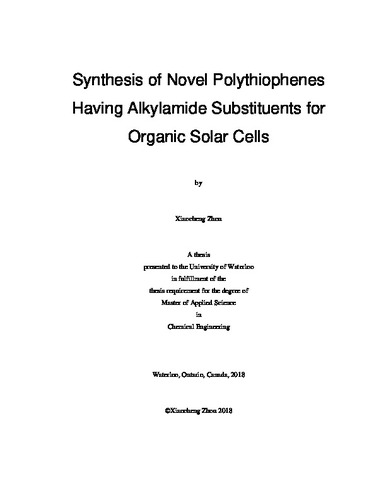 Solar energy is one of the most important sustainable energy resources which can satisfy increasingly growing demand of power and energy and reduce carbon footprint. In order to utilize the solar energy, solar cells are feasible and promising technologies to convert sunlight into electricity. Among the various types of solar cells, organic solar cells (OSCs), also known as organic photovoltaics (OPVs), are versatile technologies, because carbon based organic materials have relatively cheap, finely tunable physical properties and solution processibility that enables the manufacture of OSCs through roll-to-roll printing processes. P3HT has been one of the most intensely studied donor semiconductors for OSCs because of its easy synthesis (low cost), good solution processability, and high hole transport property. However, its relative high HOMO level results in a low open circuit voltage (Voc) and thus low power conversion efficiency (PCE) in OSCs. In this thesis, six new π-conjugated polythiophene derivatives based on the newly designed [2,2'-bithiophene]-4,4'-dicarboxamide (BTDCA) electron-deficient building block were synthesized and characterized. Firstly, P1 and P2 comprising BTDCA with different lengths of side chain and bithiophene (BT) were synthesized to balance the solubility and interchain packing. The HOMO levels of P1 and P2 were successfully lowered from -4.9 eV for P3HT to -5.3 eV for both P1 and P2. P2 showed a higher degree of crystallinity than P1, leading to its higher hole mobility (up to 1.4 × 10-2 cm2 V-1 s-1) compared to P1 (up to 2.0 × 10-3 cm2 V-1 s-1). Preliminary tests of P1 and P2 in solar cells were conducted using the blend of P1 or P2 with PC61BM. The Voc for the blend of P3HT with PC61BM was 0.59 V, while a significantly higher Voc of up to 0.87 V was obtained with the new materials P1 and P2 as donors. The Jsc values of P2 based solar cells were low, possibly due to the large grain size resulting from the higher degree of crystallinity. Then P3 was synthesized with a smaller comonomer unit, thieno[3,2-b]thiophene (TT), to decrease the crystallinity. The hole mobility for P3 dropped to 4.5 × 10-4 cm2 V-1 s-1 due to the decreased crystallinity compared with P2. Interestingly, higher solar cell performance was achieved for P3, most likely due to the optimized crystallinity property and thin film morphology. The PCE of the solar cell with the blend of P3 and ITIC (PCE = 3.5%) was three times that of P3HT and ITIC (PCE = 1.3%). After that, thiophene (T) was used as comonomer and copolymerized with BTDCA to form P4. Unfortunately, the structure was over tuned, thus resulting in very disordered chain packing and poor OTFT and OPV performances. Hydrogen bonding was then introduced into the BTDCA building block. P5 and P6 with different length of side chains were copolymerized with BT. Both P5 and P6 showed poor solubility which could be dissolved in common organic solvents such as chloroform, toluene, chlorobenzene and dichlorobenzene while P6 could be dissolved in a more polar solvent m-cresol. The new polymer P6 showed high hole mobility (up to 2.6 × 10-2 cm2 V-1 s-1) which is two times that of P2 (up to 1.4 × 10-2 cm2 V-1 s-1), due to the self-assembling property of hydrogen bonding, which improves the intermolecular interaction thus better inter-chain connectivity and higher mobility. P6 based solar cells did not show good performance due to its poor solubility which might not form bi-continuous and interpenetrating morphology in the active layer of solar cells.