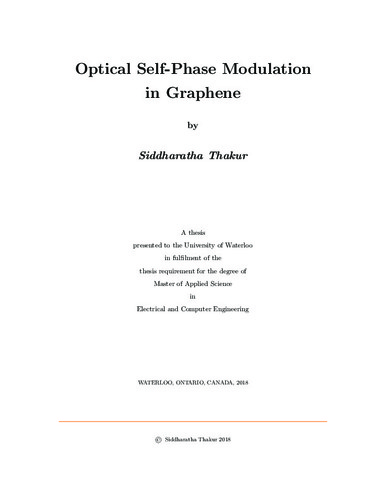 Graphene is the ﬁrst practically fabricated and stable two-dimensional material. It is an atomically thin layer of graphite with a unique gapless electronic band structure which leads to the observation of near-relativistic electron transport, 2.3% absorption of incident light, and a large nonlinear index of refraction. The relatively easy fabrication of graphene, coupled with its exceptional properties and integrability, makes this system unique for use in electronic and photonic circuits. Nonlinear optical processes in graphene stems from third-order nonlinear processes that originate from graphene’s crystal symmetry. This nonlinearity manifests as frequency mixing, selfrefraction and self-phase modulation as light traverses through the material. In literature thus far, this nonlinearity has been measured using diﬀerent methods that probe the various nonlinear eﬀects to report a large discrepancy (six orders of magnitude) in the value obtained for the nonlinear index of refraction (n2). Large variations in this value disallow predictable behaviour when designing graphene integrated photonic devices. To this end, the thesis addresses this debate by systematically analysing the contributing factors to the variation in the nonlinear refractive index and forming a fundamental understanding of the governing processes that lead to the observed behaviour. Using the Z-scan technique, the eﬀects of the wavelength and pulse-duration of the exciting source on the value of n2 were studied. The Z-scan technique exploits light induced selfrefraction to relate the change in transmittance to the value of n2. The pulse-duration measurement is conducted by taking a pulse and temporally stretching it with a dispersion-based prism set-up. In addition to that, using a pump-probe integrated Z-scan scheme, the temporal evolution of this nonlinearity is also studied. The combination of the pump-probe methodology, commonly used to study the dynamics of a system, and the Z-scan set-up gives an insight into the dynamic processes that contribute to the observed nonlinear behaviour. The n2 of graphene is experimentally measured to depend quadratically on the wavelength, with n2 growing larger with longer wavelengths. This result is also theoretically corroborated under a quantum theory developed by our group. The n2 is also shown to grow larger as the pulse-duration grows larger in the hundreds of femtoseconds regime, a result predicted in a recent publication and shown by us. The temporal evolution of the nonlinearity follows the dynamics of the system, peaking at the zero-delay point and relaxing on the timescale of the eﬀective decay of the system as dictated by the relaxation constants. The thesis does well to resolve a prevalent debate in the ﬁeld of nonlinear optics of graphene by providing a systematic study on factors contributing to the discrepancy observed in literature, and in doing so opens a path to tuning the nonlinear behaviour as per the requirement of the application, which is limited in current silicon photonics.