Portraits from the State Mental Hospitals 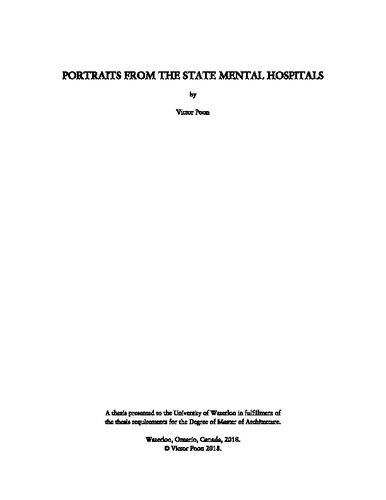 The thesis is a short book of fifty sketches. I felt I threw out a significant amount of other material – plans, sketchup models, physical models, and photographs. Many people I had shown my work to were uninterested in drawing analysis or precedent studies, but reacted strongly to the sketches of patients. People began opening up about aunts, uncles, cousins, and grandparents who suffered through various phases of mental illness. I found that this was the type of discussion I wanted to foster and threw out most of my previous work. The thesis is a challenge to the taboo of mental illness and what we do not say about it. I travelled to one of the largest and most secluded of the State Hospitals in the American South. I flew to the state of Georgia for two weeks, rented a car and drove two hours east to the small town of Milledgeville. A place has the power to change the way you feel about the world. Central State Hospital, located in the forest south of Milledgeville, had the power to awe. Here was a full city built and deserted in the geographical heart of Georgia. After my travels, I spent time studying the works of photographers who documented State Hospitals across America in the era of long-term institutionalization. Photographs have raw power and truth in their documentation of the human condition. The image pauses a moment of distress, or despair for someone who may not be aware and try to hide it. Photographs are primary documents. They tell what was done to patients, through physical restraints, being force-fed or locked up. The act of redrawing so many photographs leads to a sort of inhabitation of the collective photographs. I imagined myself inside the ward, feeling the raw concrete on the floor and hearing the dry creaks of an overloaded wooden bench. I began to emphasize with the patients. I understood their acts of resistance. I live with someone who has a mental illness. I feel a sense of horror looking at the cruel restraints and the resigned faces of suffering. As an architect who may decide to branch into healthcare, this work has warned me to take special care in designing for the vulnerable (physically, socially, politically) who are kept in places out of sight from most of the world. I have learned that places where people are sent away from their families and communities, tend to collect these people. These places can grow unchecked through willful neglect, a ‘collective amnesia’ out of sight (Meskell 2002,566). As architects, we must always keep these institutions for the vulnerable in sight. Meskell, Lynn. “Negative Heritage and Past Mastering in Archaeology.” Anthropological Quarterly 75, no. 3 (2002): 557-74. http://www.jstor.org/stable/3318204.