An Analysis of Network-Partitioning Failures in Cloud Systems 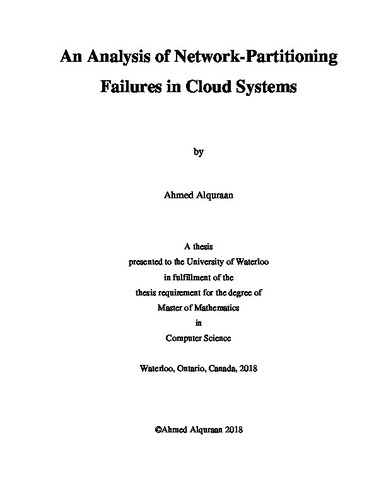 We present a comprehensive study of 136 system failures attributed to network-partitioning faults from 25 widely used distributed systems. We found that the majority of the failures led to catastrophic effects, such as data loss, reappearance of deleted data, broken locks, and system crashes. The majority of the failures can easily manifest once a network partition occurs: They require little to no client input, can be triggered by isolating a single node, and are deterministic. However, the number of test cases that one must consider is extremely large. Fortunately, we identify ordering, timing, and network fault characteristics that significantly simplify testing. Furthermore, we found that a significant number of the failures are due to design flaws in core system mechanisms. We found that the majority of the failures could have been avoided by design reviews, and could have been discovered by testing with network-partitioning fault injection. We built NEAT, a testing framework that simplifies the coordination of multiple clients and can inject different types of network-partitioning faults. We used NEAT to test seven popular systems and found and reported 32 failures.