Feeling Queer Together: Identity, Community, and the Work of Affect in the Pre-Stonewall Lesbian Magazine, The Ladder 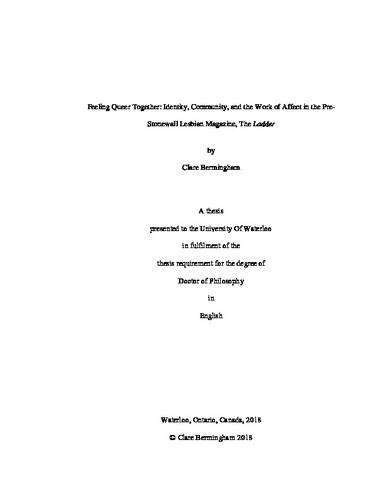 This project examines the emergence of lesbian identity and community through the work of queer feeling, specifically as it was produced in the American magazine, the Ladder (1956-1972). The Ladder was published by the Daughters of Bilitis (DOB), the first national lesbian organization, whose politics of respectability called for lesbians to conform with and adjust to normative gender and class ideals. While such strategies of assimilation responded to the traumatic discourses of disease and deviance that framed lesbian life in the 1950s and 1960s, they further marginalized women who could not easily or legitimately occupy normative categories of gender and class. As an extension of DOB, the Ladder has been treated as a largely conformist text; however, I argue that its short fiction, poetry, and readers’ letters engage differently with the push towards normativity. By reading the Ladder as an affective archive, I show that the movements and currents of this community in progress open up this historical moment for more complex readings. My affective and discursive framework isolates affective currents in the short stories and poetry published in the Ladder, and it reads them alongside and against the more political or community-oriented articles published in the magazine. I examine how value was ascribed to the lesbian through happy alignment with normative models of gender and homonormative couplings, and then I show how (un)happiness and pleasure interrupt alignment and create space for alternative ways of doing lesbianism. I examine the workings of strange feeling in poetry and fiction to show how strangeness produces inter-subjectivity, various belongings, and a sense of community responsibility. Finally, I excavate the workings of romantic affect to show how it navigates the spaces between beginnings and endings, love and death to produce queer futurity. By examining the Ladder’s literary texts and letters for the ways in which they invoke feeling and affectively produce different ways of being and doing queerness, I explore the ways that queer feeling opens up everyday spaces for lesbian possibility. In reading the Ladder as a complex affective archive of this period of early lesbian identity and community, I show how a community’s texts during critical historical moments can reveal the workings and movements of, what Raymond Williams calls a “structure of feelings,” the affective currents that constitute a community’s becomings and changes before and as they coalesce into a static history.

Clare Bermingham (2018). Feeling Queer Together: Identity, Community, and the Work of Affect in the Pre-Stonewall Lesbian Magazine, The Ladder. UWSpace. http://hdl.handle.net/10012/14206