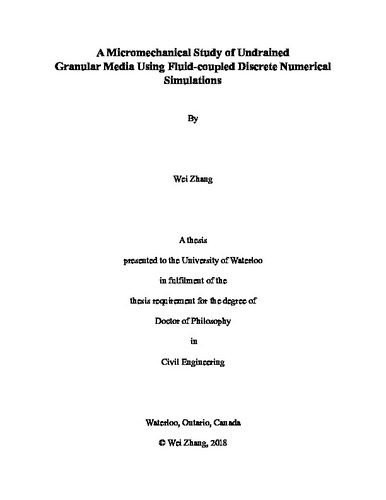 Engineering behavior of saturated granular materials under rapid loading as during earthquakes is reasonably well explored empirically. Presently, theoretical models developed within concepts of classical soil mechanics are generally adequate for engineering design. Nevertheless, even such basic soil mechanics questions, for example, as the influence of soil gradation on the stability of hydraulically placed fills can be hotly debated in engineering offices. This is due to lack of a well-developed physical framework for understanding soil behavior at a particle level, specifically in undrained conditions. The main objective of the present study is to explore micromechanics of undrained behavior of granular media using numerical simulations in which motions of discrete particles are coupled with pore fluid movements caused by deformations of individual pores. The latter are modeled as forming an interconnected network. The rate of fluid transfer between pores is considered proportional to pressure differential between pores so that macroscopically the system follows the Darcy’s Law. The fluid is considered elastic in response to pore volume change. It is demonstrated that this type particle-fluid coupling results in macroscopic Biot-Terzaghi poroelastic behavior when the system of intergranular contacts is fixed and the contact force vs interparticle displacement relationship is linear. In the case of unbound granular assemblies, when the mechanical behavior under shear deformations involves creation and disintegration of intergranular contacts, the key modeling challenge addressed in this thesis is development of a robust algorithm that tracks modifications of the pore space preserving fluid mass balance. This substantially extends the range of applications for the simulation methodology developed by Dr. R. Olivera at the University of Waterloo in 2004. The developed algorithm is based on identification of sub-volumes in the assembly containing pore groups with one-to-one mapping into uniquely identified sub-volumes in the configuration that existed at the previous computational step. These related sub-volumes contain pores that coalesced due to contact disintegration or where larger pores became subdivided into smaller pores due to creation of contacts. The subdivision of space into related sub-volumes makes it possible to accurately maintain fluid mass balance to practically any strain level as the assembly undergoes through dramatic microstructural changes. Numerical simulations of granular samples under axial loading and constant lateral stress carried out at different void ratio and consolidation stress qualitatively resemble the mechanical response of granular soils in conventional laboratory testing, including static liquefaction of loose samples. This comparison demonstrates that the developed simulation methodology reasonably reflects physical processes in undrained granular media. As an application of the developed simulation methodology the thesis presents a study of the effects of granular soil permeability on undrained behavior. In this particular study the base material is taken as a loose granular assembly of medium to fine particles where permeability was varied by changing the rate of fluid transfer from pore to pore. This physically reflects addition of fine particles into pores to impede flow (without taking into account the effect of fines on interparticle interactions). Simulations demonstrate that restricting fluid transfer from pore to pore results in increased undrained strength. Similar results were obtained in a published laboratory study that concluded that addition of fines to a granular material can prevent static liquefaction. The present study confirms this conclusion. The mechanism of this phenomenon is discussed in the thesis based on examination of the way permeability indirectly influences distributions of intergranular forces. In addition to conventional stress-strain characterization of mechanical behavior, results of all simulations are examined in terms of micromechanical descriptors that characterize changes in the number of intergranular contacts with strain, their spatial anisotropy and average contact forces. Although all micromechanical descriptors in drained and undrained conditions evolve to some asymptotic values at large shear strain, only in the case of drained deformations the same asymptotic state is reached at the same mean stress level irrespective of the initial state of packing. This mean stress-dependent “critical state” corresponds to specific values of void ratio and average coordination number induced in the course of shear deformations. Evolution of simulated granular assemblies towards the same state is not observed in undrained conditions although steady state is always reached. Envelopes of asymptotic states as function of mean stress identified for simulated samples with different initial void ratio, the so-called critical and steady state lines, are somewhat different in cases of drained and undrained deformations, as far as void ratio and coordination numbers are concerned. There appears to be no distinction in values of induced asymptotic anisotropy in drained and undrained conditions. This topic requires further studies and various avenues for further research in this area are identified in the concluding chapter of the thesis.