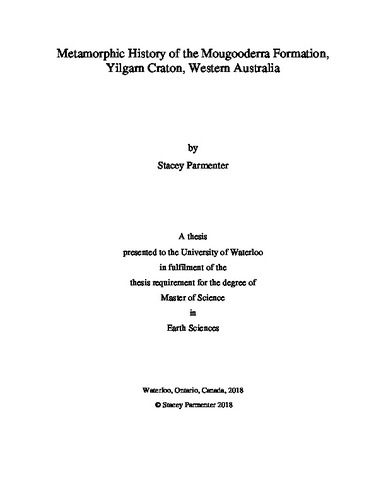 Sedimentary sequences are common in granite-greenstone belts of Archean terranes. In the Yilgarn Craton of Western Australia, the Mougooderra Formation is an extensive sedimentary sequence that preserves low-variance metamorphic mineral assemblages and unconformably overlies older greenstone material within the Murchison Domain. Geochemical, mineral composition, and geochronological data is presented in combination with pressure-temperature estimates of the Mougooderra Formation to give insights into the geodynamic conditions of this region at the time of metamorphism. Metamorphic rocks from the Mougooderra Formation display a range of metamorphic mineral assemblages that relate to different bulk compositions. Variations in the bulk compositions of these rocks can be largely attributed to variations in the amount of Fe, Mg, Ti, Al, and K. Taking into account the variation between these elements, the metamorphic rocks of the Mougooderra Formation can be separated into a high Fe-Mg group, a high Al group and an average pelitic group, each of which displays different metamorphic mineral assemblages. Results of thermobarometry and phase equilibrium modelling agree in terms of P–T estimates and indicate that the Mougooderra Formation experienced temperatures of 550–570°C and pressures of 2.2 to 3.3 kbar, while select samples of greenstone material near Mt Mulgine experienced P–T conditions of 610–650°C and 4 to 7.2 kbar. Garnet Lu-Hf and Sm-Nd geochronology returned respective ages of 2686±18 Ma (MSWD of 0.87) and 2611±35 Ma (MSWD of 0.51) for the Mougooderra Formation and ages of 2685±15 Ma (MSWD of 1.5) and 2590±21 Ma (MSWD of 0.24) for the greenstone material near Mt Mulgine, indicating simultaneous metamorphism. The difference in ages between the two garnet chronometers is consistent with slow cooling from the peak of metamorphism across this region. The metamorphic ages obtained in this study are considerably different than those of the granitic rocks within the surrounding area, including the cross-cutting Seeligson monzogranite, and suggests metamorphism was not triggered by the emplacement of post-tectonic granitic intrusions. Calculated apparent thermal gradients of the rocks from the Mougooderra Formation and greenstone material near Mt Mulgine range between 1700 and 2300 °C/GPa and 900 to 1600°C/GPa, respectively, and are consistent with other apparent thermal gradients from the western Yilgarn Craton. These ages, P–T conditions, and high apparent thermal gradients can be used to infer a thin continental lithosphere and the presence of a large, long-lived heat source at the time of metamorphism. This is compatible with a plume-dominated tectonic regime in the Yilgarn Craton during the Neoarchean.