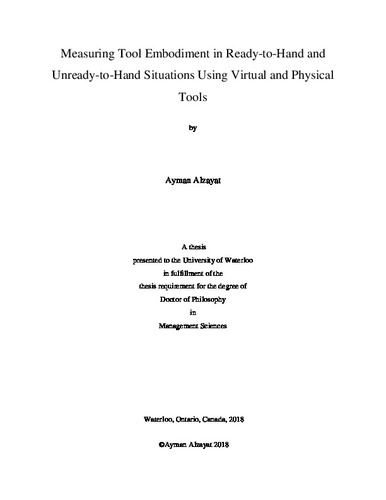 Virtual environments can provide access to a variety of information that can be designed to mimic physical attributes or afford physical-like actions. Virtual reality and other ways of interactions such as multi-touch, tangible interaction, and mid-air gestures, often promise to be more natural, where the technology becomes invisible. However, there is limited investigation on how to measure the level of invisibility when interacting with technology with a quantitative measure. For example, virtual reality provides physical-like actions that mimics every aspect of the physical world interaction, but there is no direct methodology to measure these complex interactions. As a result, designers of novel interactive technologies do not have a clear understanding of how to measure these phenomena. The current research in human computer interaction focuses on using performance measures or self-reports questionnaires to evaluate interactive technologies. Research in psychology and philosophy, on the other hand, provides an understanding of the human condition in the physical environment. Consequently, the aim of this dissertation is to provide an effective methodology to measure the invisibility aspect of technology that applies both experimental psychology and HCI research. Study 1 presented in this dissertation used the after-effect phenomenon as a measure of object embodiment — when interacting with physical objects can affect haptic changes in perception. Study 2 investigated tool embodiment to measure the interaction with physical and virtual tools, where change in attention was used as a measure of tool embodiment. Finally, study 3 further examined tool embodiment with different tool states (broken or working tool) and different inputs alternatives. Over the past decade, multi-touch surfaces have become commonplace, with many researchers and practitioners describing the benefits of their natural, physical-like interactions. Study 1 presents an empirical investigation of the psychophysical effects of direct interaction with both physical and virtual objects. The phenomenon of Kinesthetic Figural After Effects — a change in understanding of the physical size of an object after a period of exposure to an object of different size, was used as a measure. While this effect is robustly reproducible when using physical artefacts, this same effect does not manifest when manipulating virtual objects on a direct, multi-touch tabletop display. Study 2 leveraged the phenomenon of tool embodiment as measure of interaction. Tool embodiment is when a tool becomes an extension of one’s body, where attention shifts to the task at hand, rather than the tool itself. This study tested tool embodiment framework to measure the aspect of being part of a tool by incorporating philosophical and psychological concepts. This framework was applied to design and conduct study 2 that uses attention to measure readiness-to-hand with both a physical tool and a virtual tool. A novel task where participants use a tool to rotate an object, while simultaneously responding to visual stimuli both near their hand and near the task was introduced in this study. The results demonstrated that participants paid more attention to the task than to both virtual and physical tools. Study 3 further investigated tool embodiment to measure ready-to-hand and unready-to-hand situations. Locus of attention index (LAI) was used to measure the level of tool embodiment in virtual environments. Three different input modalities were used to control the virtual tool to accomplish the task. The results of this study showed that the LAI is higher with the working tool indicating an increased level of tool embodiment, and lower with broken tool indicating a decreased level of tool embodiment. Overall, the research presented in this dissertation investigated embodied interactions with both physical and virtual environments. The contributions included the construction of an evolution measure of object interaction (using the measure of after effect with physical and virtual tools) and tool interaction (using the measure of attention and LIA with physical and virtual tools). The empirical results of study 1 revealed that the after-effect measure might not be a practical measure to evaluated embodied interactions in virtual environments. However, study 2 and 3 provided a reliable method to measures embodied interactions when using tools to interact with the virtual environments. This dissertation also provided tool embodiment framework that can be used as a guide for designers to evaluate the invisibility aspect of technology.