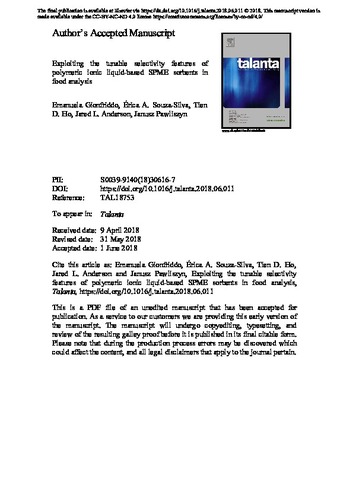 In this work, the performances of polymeric ionic liquid (PIL) based solid-phase microextraction (SPME) coatings were assessed for applications concerning food safety and quality. Two different polymeric ionic liquid coatings, namely poly(1–4-vinylbenzyl-3-hexadecylimidazolium) bis[(trifluoromethyl)sulfonyl] imide (poly([VBHDIM][NTf2]), PIL 1, and N,N-didecyl-N-methyl-d-glucaminium poly(2-methyl-acrylic acid 2-[1-(3-{2-[2-(3-trifluoromethanesulfonylamino-propoxy)-ethoxy]-ethoxy}-propylamino)-vinylamino]-ethyl ester) (poly([DDMGlu][MTFSI]), PIL 2, were evaluated. The PIL-based coatings were compared to commercially available SPME coatings in terms of their performance toward extraction of pesticides and fruit metabolites. The partition coefficients (Kfs) of the tested coatings were calculated, with PIL 1 demonstrating similar or better performance compared to the commercial coatings. Design of experiment (DoE) was applied to optimize the parameters that most influenced SPME extraction, and a quantitative method for determination of 5 organophosphorus pesticides was developed by using PIL-based coatings and commercial SPME fibers. Despite the thin layer of the sorbent coating, PIL 1 achieved limits of quantitation at the low part-per-billion level. Moreover, in a comparative investigation of analyte coverage carried out via HS-SPME-GCxGC-ToF/MS with grape homogenate as model matrix, excellent performances were observed for the PIL-based coatings toward the determination of fruit metabolites, demonstrating their capability towards broad extractive coverage of analytes characterized by various physicochemical properties.