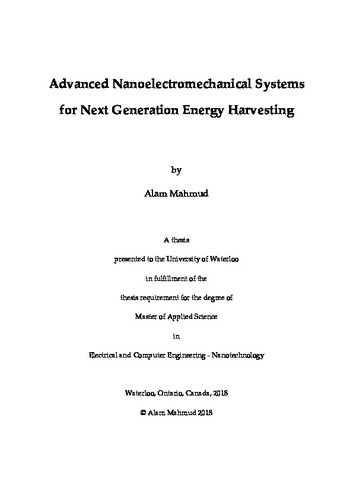 The ever-increasing desire to produce portable, mobile and self-powered wireless micro-/nano systems (MNSs) with extended lifetimes has lead to the significant advancement in the area of mechanical energy harvesting over the last few years and it has been possible not only because has nanotechnology evolved as a powerful tool for the manipulation of matter on an atomic, molecular, and supramolecular scale, but also different micro-/nano fabrication techniques have enabled researchers and scientists to create, visualize, analyse and manipulate nano-structures, as well as to probe their nano-chemistry, nano-mechanics and other properties within the systems. The dissertation first discusses briefly about energy harvesting technologies for self-powered MNSs, for example a wireless aircraft structural health monitoring (SHM) system, with a particular focus on piezoelectric nanogenerators (PENG) and triboelectric nanogenerators (TENG) as they are the most promising approaches for converting ambient tiny mechanical energy into electrical energy efficiently and effectively and then it analyzes the theoretical and experimental methodologies for efficient energy harvesting using PENG, TENG and hybrid devices. The piezoelectric property intertwined with the semiconducting behaviour of different ZnO nanostructures has made them ideal candidate for piezoelectric energy harvesting, also intensive and state-of-the-art research has been going on to enhance the performance of the PENG devices based on 1D and 2D ZnO nanostructures. In this work, a high performance and consolidated PENG device based on the integration of ZnO nanowires and nanoplates on the same substrate has been demonstrated, that produces an output electrical power of 8.4 µW/cm2 at the matched load of 10MΩ that manifests their ability for powering up different MNSs. Since hybrid nanogenerators (HNG) integrate different types of harvesters in a single unit, where several energy sources can be leveraged either simultaneously or individually, in the next part of this work, a HNG device integrating PENG and TENG components has been designed, fabricated and characterized where PENG and TENG parts mutually enhance the performance of each other resulting an instantaneous peak power density of 1.864mW/cm2 and subsequently the device has been used to charge several commercial capacitors to corroborate their potential for aircraft SHM applications. Moreover, the hybrid device exhibits strong potential for wearable electronics as it can harvest energy from human walking and normal hand movements. However, successful implementation of self-powered electronics, such as a wireless aircraft SHM depends not only on the performance of individual parts but also on components integration within the system, where each device/system node within the network consists of a low-power microcontroller unit, high-performance data-processing/storage units, a wireless signal transceiver, ultrasensitive sensors based on a micro-/nano electro-mechanical system, and most importantly the embedded powering units. This dissertation aims to deepen the understanding of the different energy harvesting methods utilizing the knowledge of nanoscale phenomena and nanofabrication tools along with the associated prospects and challenges and thus, this research in the field of energy harvesting using advanced nano electro-mechanical systems could have a substantial impact on many areas, ranging from the fundamental study of new nanomaterial properties and different effects in nanostructures to diverse applications.