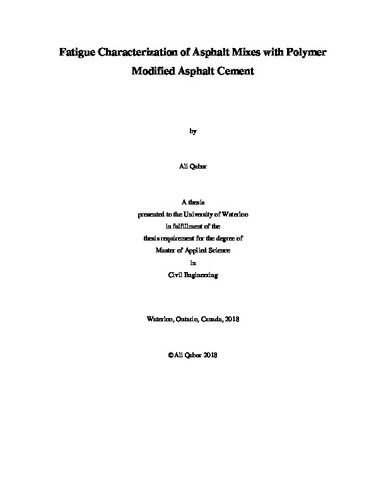 Asphalt pavement cracking is the most prevalent distress in pavements. In flexible pavements, fatigue cracking is a major cause of deterioration and can significantly reduce the service life of pavements [1]. Fatigue cracking is caused by traffic loading and can be accelerated by aging of the asphalt, freeze-thaw cycles, and poorly designed asphalt concrete mixture. Fatigue resistance of asphalt mixes could be improved by adding Polymer Modified Asphalt Cement (PMAC) [2]. In particular, the use of Styrene-Butadiene-Styrene (SBS) was found to be an efficient way to increase the fatigue life of mixes [3]. However, the primary issue is the lack of consistent performance testing methods to determine fatigue performance. In addition, the relationship between the PMAC properties and mixture performance is not fully understood. This thesis will focus on the evaluation of asphalt mixes with PMAC using the 4 point-bending beam (4PB) test to determine the fatigue performance of asphalt mixtures. The classical fatigue “WÖHLER’’ curve and “DGCB” damage rate method, which was developed at Département Génie Civil et Bâtiment in Lyon, have been used to evaluate and characterize the fatigue of the asphalt mixes in this study. In general, it was found that the fatigue life (Nf50%) was improved when Polymer Modified Asphalt Cement was used, and the polymer content increased. Both fatigue analysis methods, by WÖHLER curve and the DGCB method, showed that the addition of SBS polymer improved the fatigue life and reduced the damage from fatigue loading. Finally, some recommendations were made with regards to fatigue testing.