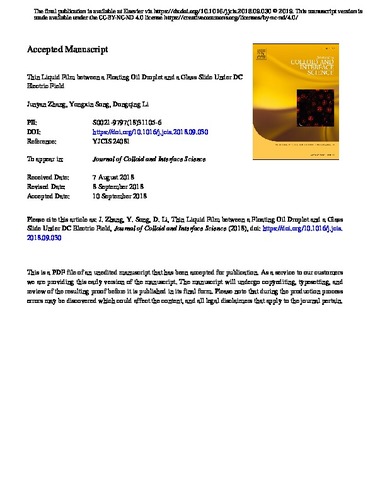 Hypothesis The shape of the liquid film (SLF) between a glass slide and an oil droplet immersed in an aqueous solution is influenced by the direct current (DC) electric field. The liquid film, consisting of the central film region and the meniscus film region, is formed between a floating oil droplet and a glass slide overhead. Experiments The SLF was experimentally studied in aqueous solutions of different ionic concentrations and pH values. After the DC electric fields were applied along the glass slide in horizontal direction, the diameter of central film and the thickness of meniscus film were measured by the interference method with an optical microscope. Findings The diameter of the central film decreases with the increase in the applied electric fields and declines at higher pH values while increases when the ionic concentration increases. The meniscus film becomes thicker with the increase in applied electric fields and is thicker in pH = 11 solution and thinner in pH = 3 and 1 mM NaCl solution. This is the first study of dynamic thin liquid film under DC electric field, which may be attributed to the balance of dielectrophoretic (DEP) force, colloidal force and the deformable characteristic of the oil droplet.