Judgment and the Order of Passivity: An Investigation of the Banality of Evil in the Cases of the Rwandan and Cambodian Genocides, and Modern Bureaucracy 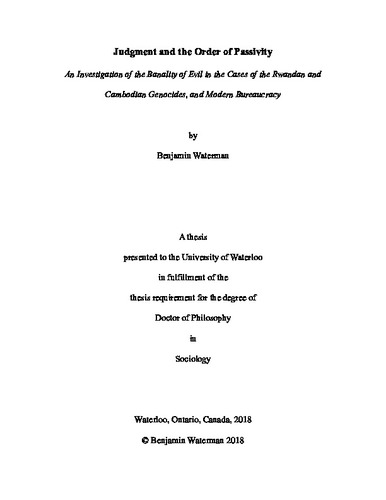 In the controversy surrounding Hannah Arendt’s coverage of the Eichmann trial in Eichmann in Jerusalem: A Report on the Banality of Evil the discussion of her work has come to recognize that Arendt’s account of the banality of evil is not meant to excuse Adolf Eichmann for serving as the SS officer charged with overseeing the logistical arrangements needed to enact the Final Solution. This writing will examine three case studies – a discussion of the genocides in Rwanda and in Cambodia and a discussion of modern bureaucracy – and consider both to what extent Arendt’s notion of the banality of evil contributes to an understanding of the practices of genocide and modern bureaucracy, and to what extent does an examination of these practices contribute to an understanding of the banality of evil. The argument will be made that Arendt’s use of this phrase refers simply to the willingness to perform activities if they are viewed as being in compliance with the prevailing moral and/or legal order of the society in which they occur. Though this suggests her offering a fairly straightforward message about the “dangers of conformity,” or the willingness to thoughtlessly engage in conventional practices to such an extreme degree, the thesis will seek to demonstrate the complexity of recognizing that this level of conformity is present under these circumstances. The examination of the three cases being discussed will centre both on Arendt’s discussion of the human faculties as well as the form of sociological investigation developed by Alan Blum and Peter McHugh known as Analysis, and the focus of this method upon understanding the merits of human activity. The argument seeks to show that by following the reflexive turn in Analysis an understanding of what is involved in showing a concern for the meaning of human activity is not arrived at “subjectively.” Rather the suggestion will be made that even if the resolution of this meaning is without a definitive outcome its importance is demonstrated through a consideration of the cases examined and the concern shown within each of them for matters such as friendship, justice, the activity of thinking and the nature of evil. Lastly, the argument will use Arendt’s work to suggest that not only the activity of thinking but each of the different human faculties can potentially offer a way to appreciate the “thoughtlessness” that Arendt suggests is indicative of the banality of evil, and which may be encountered in the mundane setting of modern bureaucracy and/or in the extreme situations of genocide.

Benjamin Waterman (2018). Judgment and the Order of Passivity: An Investigation of the Banality of Evil in the Cases of the Rwandan and Cambodian Genocides, and Modern Bureaucracy. UWSpace. http://hdl.handle.net/10012/14091