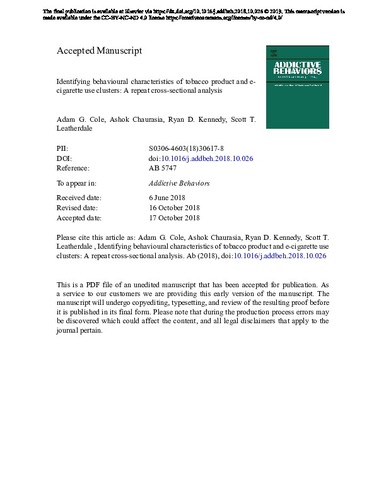 Background Youth may use a variety of tobacco products and e-cigarettes. However, there is a lack of evidence for the combinations of tobacco products and e-cigarettes commonly used by youth in Canada and whether youth from different usage classes share similar characteristics. Methods A cohort of 9th grade students from Ontario, Canada was identified at baseline (2013–14) of the COMPASS study (n = 4651). Classes of youth that currently use similar combinations of tobacco products and e-cigarettes were identified at baseline, one (FY1) and two years later (FY2) using latent class analysis. Multinomial logistic regression models identified demographic and behavioural characteristics (e.g., environmental influences, substance use behaviours, etc.) of youth in current tobacco and e-cigarette use classes relative to youth in non-current use classes. Results At baseline, a three-class model was identified as best, while a four-class model was identified at FY1 and FY2. A non-current use group and an all-product use group were identified every year. Students that reported having friends that smoked cigarettes, binge drinking, and using marijuana were more likely to be classified into a current use class. Conclusions Tobacco cigarettes were more likely to be used with other products than on their own. An all-product use group was identified across all three survey waves and the prevalence of this group increased over time. Given that many youth in this study used more than one tobacco product or e-cigarette and commonly reported binge drinking and using marijuana, prevention and cessation activities should address the use of multiple products.