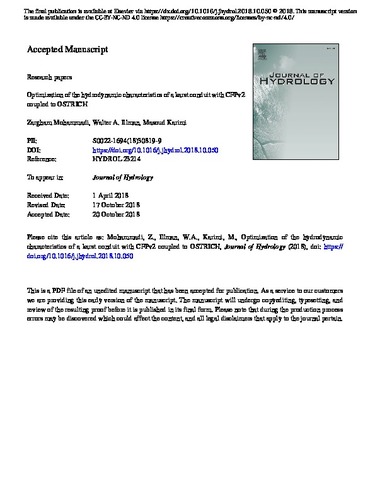 In order to better define the characteristics of a karst conduit, an integrated hydrogeological study including numerical modeling using CFPv2 is conducted at a karst aquifer in the Zagros Mountain Region of Iran. The Sarvak limestone aquifer in the Nil Anticline is the main karst aquifer of the study area with major groundwater discharge taking place at Sarkur spring. An annual water balance and a dye tracing test confirmed that the karst system is mainly recharged through rainfall and the Maroon River. Several depressions are observed along the banks of the river with a major one classified as a sinkhole used for dye injection. A groundwater flow model was developed based on the available hydrogeological information. A probable direct conduit flow path with an estimated groundwater flow velocity of 96 m/h is estimated between the injection point and the Sarkur spring. Four scenarios are assumed to simulate the probable conduit flow path using the CFPv2 code. As one of the first attempts in regional groundwater flow modeling of a karst aquifer, CFPv2 is automatically calibrated with field measurements of spring discharge and a dye breakthrough curve through a parameter estimation code OSTRICH to optimize the characteristics of the conduit through the minimization of the weighted sum of square error. Simulated results reveal that a conduit with a diameter of 2.9 m is required to adequately simulate spring discharge and dye tracer migration between the injection and discharge points. Our new approach (linking of CFPv2 and OSTRICH) provides a deeper understanding of groundwater flow and solute transport in karst terrains even when available data are limited and the approach should be applicable to other areas.

Zargham Mohammadi, Walter A. Illman, Masoud Karimi (2018). Optimization of the hydrodynamic characteristics of a karst conduit with CFPv2 coupled to OSTRICH. UWSpace. http://hdl.handle.net/10012/14083